July 23, 2020
How to defend yourself against a gangsta with jerk chicken and other bon mots from Zeen? 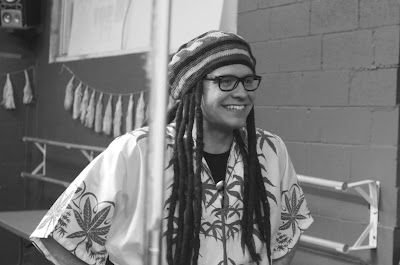 Zeen? is a “mocumentary” film that takes a comedic view on making highbrow White movies about Jamaica.  Zeen (got it?)?
This made-in-Markham shorty is the Caribbean Tales Film Festival’s (CTFF’s) marquee movie for this fall’s Red and White Comedy Night. The September 14th online screening is showcasing five Canadian comedic short films, and organizers guarantee Zeen? will “have you laughing out loud” as you watch on your smartphone or laptop.
The 15th annual CaribbeanTales Film Festival runs from September 9th until October 2nd. This year, because of the virus shutdown, the CTFF will take place online with nine nights and more than 25 short and feature films of live stream entertainment.
“My goal with the movie was to examine the reasons why white people might misrepresent, misinterpret or place judgment on Black culture and realities, “said director, writer and star Carlyx Passailaigue. “Many people unfortunately still see our Black brothers and sisters as “the other” in a negative context. Zeen? questions how much of this negative representation is based on the writer/filmmaker’s own unconscious prejudice, ignorance and stubbornness." 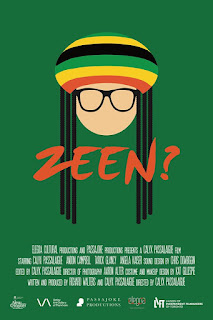 In the vernacular of the day, the name Chad is now the male version of a Karen - a derogatory slang for a young clueless urban White man who thinks he is the planet’s smartest man and that he has the world by the tail. In Zeen? Passailaique is a filmmaker named Chad Cortez a White Jamaican who aims to shoot a snooty social drama called “Brothers in Babylon.” And oh yes, the name Chad fits this character like a Roots baseball hat worn backwards.
“Brothers in Babylon – the movie within a movie - is the story of two estranged Jamaican brothers - one White and the other Black -- who reconnect in a modern day Babylon (Toronto). Chad has done well, but his brother hasn’t. He is running from a gangsta who wants to kill him for money owed.
Chad has gathered together a team of actors and crew to make this film, on a shoestring?in his apartment. He is whiter than snow but thinks he knows more about the island than all his Caribbean Canadian actors and crew (Jacob Currie, Yannick Francis and Danny Roberts) put together.
He does have Jamaican roots. His white grandparents left the island?in the ‘70s because of Jamaica’s soaring crime rate. Chad says in the movie that he was born in Canada and has visited the island only once while on a Caribbean cruise with his parents.
Much of what Chad says on film bounces between funny and cringeworthy. His screwed up street talk is what a Chad might dream up when writing dialogue for Black actors. He tells the thug he will take him down with jerk chicken if he doesn’t drop his gun!
The actors and crew try to school him, but to no avail. Arguments. Cast walkouts. Crew demands for more pay. But yes the film within the film is eventually made.
In real life Passailaique does have the roots. “My father, grandmother, aunts and uncles were born in Jamaica, he said, “ and that whole side of the family immigratedto Canada in the 70s.” he said. “However, there are many differences between myself and Chad, the main one being that I was actually raised with Caribbean culture and values, whereas Chad is completely oblivious to them.
“That aspect of the character was definitely invented for the sake of the story and the comedy. In my own life, I have encountered people who are shocked or confused by the idea that I’m Jamaican, but I would never try to “exploit” the culture for personal gain in the way that Chad does”.
The 30-minute comedy is not your typical CTFF film, but, Zeen? is not a typical anything. It was commissioned as part of a 2019 exhibition at Markham’s Varley Gallery. The art show, “Tout- Monde: Markham,” is in reference to the Black Caribbean philosopher Edouard Glissant, who developed a theory that separate cultures should remain masters to themselves, while changing by exchanging.
“I was initially a little nervous to screen this film at the Varley, but it actually received a very positive reception from the audience. The film seemingly never fails to make people laugh, which I’m very thankful for,” said Passailaique. 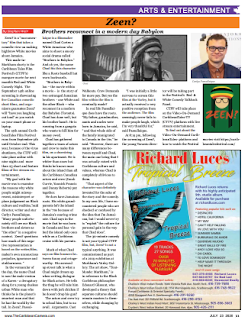 At 8:15 pm, following the screening of Zeen? the young Toronto director will be taking part in the Festival’s Red & White Comedy Talkback Panel.
CTFF will take place on the Video-On-Demand CaribbeanTales - TV (CTTV) platform with live stream entertainment. To find out about the Video-On-Demand Caribbean Tales platform and how to watch the Festival movies visit https://caribbeantalesfestival.com/