Showing posts from March, 2016
Show All

Where have all the Canadians Gone? 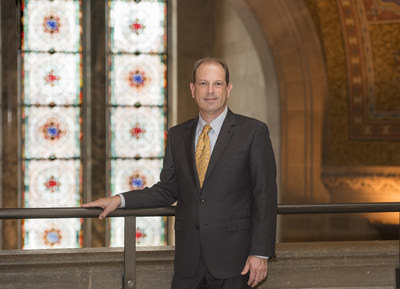 CNW photograph -  Josh Basseches Trending At Toronto's Cultural Attractions: Hire Out Of Canada . Just got a CNW release about the new head of the Royal Ontario Museum here in Toronto. In the press release ROM welcomes its new Director & CEO, Josh Basseches . He was previously the Deputy Director of the Peabody Essex Museum in Salem, Massachusetts. Basseches is well qualified to take-over a museum the stature and budget of the ROM. However, by passing over, once again, worthy Canadian candidates for the job (last CEO, an Australian, lef t her post early), ROM has continued a disturbing trend here in Toronto -- most of the high profile roles at this city's key cultural institutions have been handed over, at a huge expense, to foreign nationals. Earlier this year the Art Gallery of Ontario announced that after a 7-month worldwide search it had hired Stephan Jost as CEO of the Gallery. A Michigan born art expert, Jost does not appear to have a background in
Post a Comment
Read more

LET ME GIVE YOU THIS BOOK FOR FREE – REALLY! (PLEASE DON’T RUN AWAY) 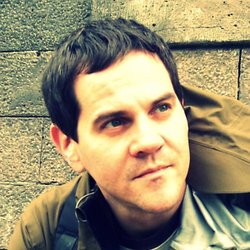 . The Business of Promoting E-Books SALLOW CITY - Micah Reed's Flint Michigan Blood Bath From time-to-time I promote E-Books.   On a couple of occasion I have been very successful. Other times, well let’s just say less so.   Last   author driven project I worked on, the aging/ailing   Beatle biographer was so unimpressed with the campaign I launched that he refused to pay full freight on my invoice – it was so bad I couldn’t afford a dozen brown ones to wear on my face. When it comes to book promotion It is easier to squish a camel through the eye of a needle than it is to successfully push an E-Book work of fiction.   Electronic book sales are currently in decline in Canada, but the number of E-Books that   first timers are selling cheap   or simply giving away for FREE soars. Readers have quickly gotten used to the idea that they don’t have to pay much (or anything) to fill their Kobo, Kindle or IPad .   Every day I am offered, through programmes like Free-ebook
Post a Comment
Read more

Aging and New Age Thoughts: A Conversation With Ian Brown 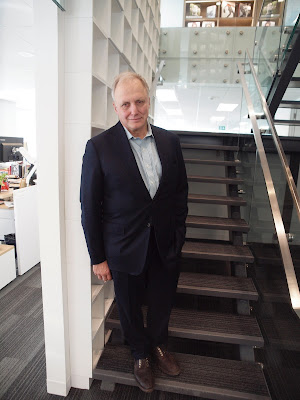 IAN BROWN SHORTLISTED 2016 RBC TAYLOR PRIZE Regrets? For journalist Ian Brown there are a few but not for the big things. Ian regrets the book not read, should he read three long classics or just the one he knows he will enjoy, does he have enough time to finish?  Face to face Brown is the kind of man you just want to be friends with; smart, funny, educated and able to hold his own in a conversation. His takes on life have you laughing and thinking at the same time just as they do in his recent memoir ' Sixty, ' shortlisted for the RBC Taylor Prize. In Sixty Ian kept a journal of his 60 th year with a touching honesty that left no wart untouched. Baring his soul was powerful and in many ways liberating for him giving him an outlet to vent all of his emotions of a mentally challenging year. Putting words to paper is what writers do but baring your soul can be like walking into a minefield. Catching a bite at Fresh and Wild during a lunch time interview I
Post a Comment
Read more 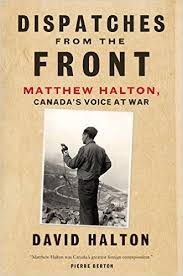 BOOK SHORTLISTED FOR RBC TAYLOR PRIZE   Canadian David Halton grew up in London during WWII with a father who was rarely home. Matthew Halton was the voice of Canada, sending reports home for the Toronto Star and CBC from the front lines. His stories from the battlefields kept Canadians aware of what was happening daily but today that voice has been largely forgotten, or was until David put ink to paper. Dispatches From The Front brings this extraordinary man to a new generation. Born in Pincher Creek, Alberta Matthew may have grown up with humble means but his parents made sure that their children read the classics, cultivating a love and thirst for knowledge. David reflected how his grandmother had the writing bug reporting for the local paper where Matthew would write his first stories. When at 12 Matthew asked to write for the paper the editor sent him out to cover a local campground as a lark thinking nothing would come of it. Matthew not only covered it but wrote with s
Post a Comment
Read more

Camilla Gibb Is Happy That Her Book Deals With Sadness 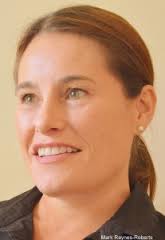 K.J Mullins interviews Toronto writer Camilla Gibb Camilla Gibb believes in keeping journals, in fact her students at June Callwood Professor in Social Justice are required to keep one during their studies using an actual pen for the art of writing. With five award winning books under her belt Gibb knows the importance of catching those moments that may be forgotten if not written down in the moment.  Camilla Gibb Camilla Gibb is the author of 'This Is Happy,' one of the five shortlisted books for this year's RBC Taylor Prize to be announced on March 7 in Toronto. Snow was falling outside as we sat in the lobby at Toronto's King Edward Hotel to discuss her book and how life has changed since it was written.  Gibb said that her book was documenting a moving target (the birth and first few years of her daughter's life) while looking back to her own upbringing. That moving target, life in motion, has grown in the two years since the book was written.
Post a Comment
Read more
More posts