Showing posts from November, 2018
Show All

Haitian Play Has Three Days To Sink Or Swim In Toronto 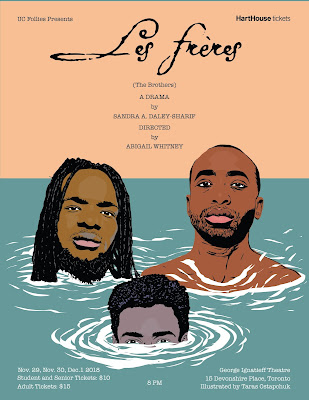 Les Frères  – Sink of Swim for a Three-Day Run In Toronto By Stephen Weir Three Brothers. One’s nose and mouth   is underwater.  The two others are treading water, heads barely breaking the surface. The striking theatre poster is a metaphor for Haiti and an advertisement for  Les Frères ,  a new play debuting in Toronto next weekend. Les Frères   (The Brothers) is a 90-minute play set in Harlem and performed by the UC Follies in English (with a little bit of Creole thrown in for good measure). Written by New York based Sandra Daley-Sharif, her play, runs from November 29 to December 1 at the downtown George Ignatieff Theatre. The play  follows three estranged brothers of Haitian descent, who come home to Harlem for their father’s final days. Troubled memories filled with anger and abuse come rushing back as they deal with their father’s death. Abigail Whitney   “  We found the play through the New Play Exchange App and I successfully pitched it to the U of T drama
Post a Comment
Read more 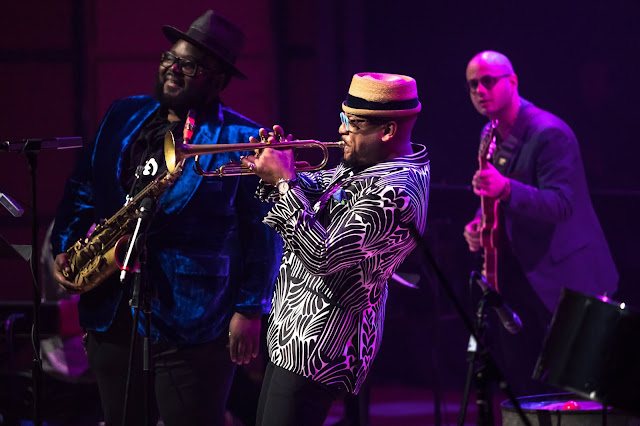 Etienne Charles on stage in Toronto, photo by Maria Nunes Etienne Charles in Toronto Carnival. The Sound of People Madly Clapping Volume 1 By Stephen Weir with notes from Ken Bruzual Trinidad born jazzman Etienne Charles proved the old adage never listen to the Rumour Mill. Word on the street earlier this month was saying that his big venue concert was going to be cancelled because of slow ticket sales.     Although not a total sell-out thanks to Caribbean Camera support Charles’ concert turned out to be hottest ticket in Toronto last Friday night. Described as one of the most “exciting young jazz artists today” Michigan based  Etienne Charles , launched the new “Jazz at the George Series” at the George Weston Recital Hall (the Sony Centre’s North York Theatre).   Charles, his five sidemen, a guest pan player and three costumed performers, also used their first Toronto performance as the North American launching pad for their brand new CD Carnival, the Sound of A
Post a Comment
Read more

Solo Show Will Attract The Masses To The AGO Photos and Story By Stephen Weir Even though the Mickalene Thomas: Femmes Noire exhibition doesn't open until this evening, there is a big buzz in the downtown Toronto already! Internationally acclaimed for her powerful portraits of Black women - New York based artist Mickalene Thomas has brought to Toronto's Art Gallery of Ontario a remarkable exhibition that sparks urgent questions about race and sexuality and how we see the Black female body. On Tuesday the artist came to  Toronto to hold court at a crowded morning media scrum. A large group of television, radio and print journalists (including me on behalf of Caribbean Camera) followed the artist through the large multi-media show as she gave the background of each piece in the show. " I don't speak French," the artist told the Caribbean Camera. "I used French because it is very descriptive (to call the show Femmes Noires).When you get off the el
Post a Comment
Read more

At City Hall – Black Knight’s Brand New Day! By Stephen Weir in today's Caribbean Camera newspape r Scarborough’s Black Knight is currently stabled in the lobby of Toronto’s City Hall.   The real-life sized statue of a young black girl riding a jet-black unicorn is the first thing visitors now see when they enter the Queen St. Building. It was commissioned for Scarborough’s first all-night Nuit Blanc festival held in September of this year. The statue is built from 80,000 individual black Lego bricks. Named Cavalier Noir   (the Black Knight), it is meant to answer the question, “ If Scarborough was to commemorate its own heroes, what would the monument look like?” Created by two Scarborough stars - artist Ekow Nimako and video maker Director X – they say the Lego statue “ stands as an emblem of hope for the disenfranchised by drawing on hip-hop’s creative strategies: taking existing, discarded, often overlooked elements and flipping them to inspire and amplify voices
Post a Comment
Read more 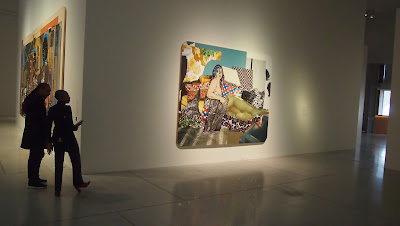 Breakthrough Exhibition Opening At Toronto's AGO By Stephen Weir as published in the Caribbean Camera A first for a noted American artist is about to be made at Toronto’s Art Gallery of Ontario (AGO).  Opening next Thursday is a solo exhibition by African-American artist Mickalene Thomas – this is the first Canadian solo show for the famed painter / photographer. Recognize the name? She is best known as being the first artist to create a portrait of the First Lady Michelle Obama.  Thomas's silk-screen portrait, "Michelle O," was a riff on Andy Warhol's famous portrait of former First Lady Jackie O and captured the attention of all Americans. Thomas has made a career out of creating powerful portraits of Black women.  The Brooklyn-based 47-year old artist comes to the  AGO  November 29th with a remarkable exhibition that sparks urgent questions about race and sexuality and how society sees the Black female body.  Portrait of Kalena by Mick
Post a Comment
Read more 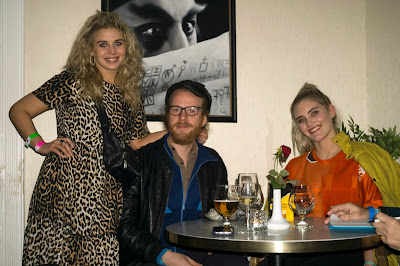 Arctic Soul  - Where Everything is White Except the Music Salka Sól (l),  Gnúsi  Yones , and  his partner  Steinunn Jóns - photo by Andrew Weir By Stephen Weir  / Caribbean Camera ( Reykjavík, Iceland)   —- You get off the plane, suck in the super clean air, and get your bearings.  Everything is white. The white tipped mountains. The flecks and traces of snow in the air. And then there are the people.  Draco Malfoy white blond hair.  Bright alabaster skin.  Perfectly coiffured and impeccably dressed (except for the industrial strength snow boots).   Salka Sól by  Stephen Weir Iceland is the last place in the world you would expect to hear the soulful sounds of Jamaican reggae. AmabAdamA have been writing and performing Arctic Reggae for the past five years, and their music is as pure Irie as the driven snow. Gnúsi  Yones , his partner  Steinunn Jóns   and their best friend  Salka Sól   have been performing in Iceland and England for over ten years and have taught a
Post a Comment
Location: Reykjavík, Iceland
Read more 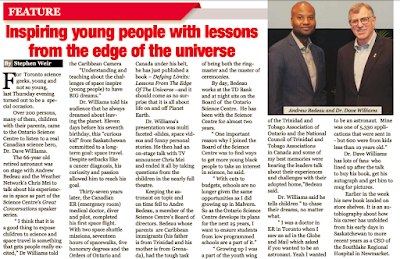 On Stage and Out in Space – Getting Our Kids To Think Big By Stephen Weir for Caribbean Camera Thursday evening was a special evening for Toronto science geeks … of any age. Over 200 people, many of the children, came out to the Ontario Science Centre to listen to a real Canadian science hero, Dr. Dave Williams. The 66-year old retired astronaut was on stage with Andrew Bedeau and the  Weather Network's  Chris Mei to talk about his experiences in space as part of the Science Centre’s Great Conversations speaker series.   The evening attracted many children who came out with their parents to listen to the astronaut and get a selfie when his hour long talk was over. “ I think that it is a good thing to expose children to science and space travel is something that gets people really excited,” Dave Williams told the Caribbean Camera at the Thursday event.   “Understanding and teaching about the challenges of space inspire (young people) to have BIG dreams.’ Andre
Post a Comment
Location: 770 Don Mills Rd, North York, ON M3C 1T3, Canada
Read more
More posts