Showing posts from 2013
Show All

Originally published in: http:// www.huffingtonpost.ca/../ ../stephen-weir/ sink-captain-johns-create_b _4475196.html Toronto, It's Time to Sink This Ship .... and Captain John doesn't have to go down with Her. Bow of Capt. John's Floating Seafood Restaurant Sometime on my bum-busting boat ride out from Fort Myers, I realized that the city of Toronto could do something special for its diver tourism industry ... sink the Captain John Toronto Harbour Floating Restaurant. I was in Florida last month, on board a small, open boat heading 21/2 hours out into the wilds of the Gulf of Mexico to scuba dive on a failed Florida Keys museum. I like hundreds of thousands of other divers will go just about anywhere to dive on a shipwreck. Thirty miles out and 90 feet down, the USS Mohawk, sunk just a year ago, is now one of the most sought after underwater attractions in Florida waters. And for the last few months she has hosted an underwater art show that is gar
Post a Comment
Read more 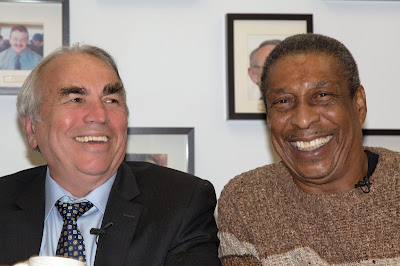 Harold Levy and John Artis Photo by George Socka TWENTY YEARS OF SAVING THE INNOCENT.  AIDWYC SET TO GO BACK TO THE FUTURE Originally published in Huffington Post.  http://www.huffingtonpost.ca/stephen-weir/wrongful-convictions_b_4256461.html#es_share_ended     BY Stephen Weir.      Over the past 20 years, the Association in Defence of the Wrongly Convicted (AIDWYC) have quarterbacked 18 post-conviction exonerations of people convicted of murder here in Canada. As AIDWYC gets set to mark its 20th anniversary, there are appeals before the courts that could cause that successful case count to rise. On Friday morning, the Supreme Court of Canada ordered that Leighton Hay , a Toronto man found guilty of first-degree murder in 2004, will have a new trial. For 12 years Mr. Hay and AIDWYC have been fighting to clear his name and the Supreme Court of Canada's decision is an important step towards establishing his innocence. AIDWYC success stories are becoming
Post a Comment
Read more 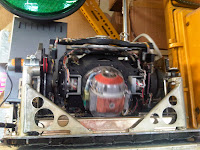 . Boomer Memories of the Cold War Aerospace Industry as it spins, flies and slips off the Mortal Coil Litton gyro spins in junk store I spent over 15-years working for a company that made very expensive, highly accurate navigation systems for military and commercial aircraft.  Towards the end of the Cold War, Litton Systems Canada modified an aircraft navigation system for the US cruise missile programme. Employment and profits soared - but as with most things Boomer, it all eventually leads to Bust. The cruise missile was the first low cost missile to use a terrain mapping system (think of it as a precursor to Google Maps) that allowed it to fly close to the ground, past mountains and even tall buildings to blow up a target.  The Litton spinning wheel gyroscopes made sure that the missile knew where it was at all times. It was a technology leap forward in modern warfare. Mindful of the "Red" menace, very little news of the Canadian made navigation eq
2 comments
Read more 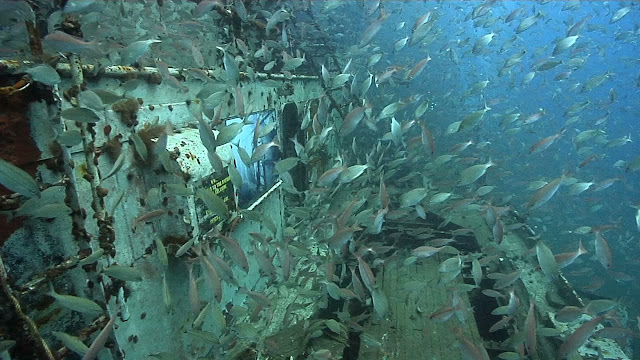 Art Exhibition on the sunken hull of the USS Mohawk - 30 miles into the Gulf from For Myers Fort Myers shipwreck Enjoy the 12 -work exhibitions but always mind the sharks By Stephen Weir   From the Huffington Post It is an international happening -- an art show that will have you holding your breath -- but only for so long.  People in-the-know and who have access to dive equipment, a big boat and the willingness to swim with big fishes, have been making underwater pilgrimages all summer to see the hidden work of Austrian artist Andreas Franke . Underwater closeup of hull art show Considered one of the 200 best photographers in the world, Franke has taken his art underwater in the new show: The Sinking World Of Andreas Franke - Mohawk Project – Life Above Refined Below ( http://www.thesinkingworld.com/).  This is the third time that he has put together a composite photography exhibition that can only be seen underwater. Underwater closeup of hull
Post a Comment
Read more

The summer of the pinball tilts out Monday 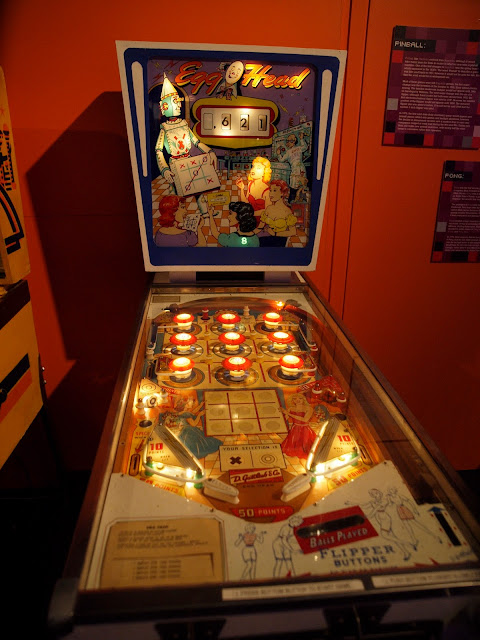 Game On 2.0 Game Outs end of Monday in Toronto Game On 2.0 has been the most popular summer kids' exhibition to play in Toronto for years and years. Sadly the Ontario Science Centre's interactive exhibition flippers out end-of-day, Labour Day Monday. "Outstanding, that is all I can say," exclaimed Anna Relyea, the Science Centre's director of public relations.  " Kids, and their parents took to this exhibition right from our opening press conference back in the spring." This fingers-on show traces the 60-year evolution of the computer game beginning with the pinball machine, moving onto Pong and ending with a futuristic 3-D dome game called Virtusphere .  Virtusphere is played  from the inside of 10-foot hollow sphere -- the user runs freely inside while wearing a wireless, head-mounted display. In all there are 150  games and all of them work.  Gamers can learn about the science that goes into making a computer game, or the
Post a Comment
Read more

August 23, 2013
FESTIVAL CANCELLED (AGAIN) IMMEDIATE RELEASE TORONTO AFRICAN FILM & MUSIC FESTIVAL EVENT CANCELLED UNTIL FURTHER NOTICE Toronto, August 23, 2013 ATTENTION: MEDIA, SPONSORS, VISITORS & GOVERNMENT OFFICIALS The Toronto African Film & Music Festival which was slated to be held August 30 – September 1, at the Toronto International Centre has been postponed. A new date will be announced shortly. There is one major reason why we are once again postponing the festival. The Federal Government’s Visa services staff are currently on strike and the pending visas for the African performing artists have not been processed as of yet. It has been decided to push back the dates, until the visa’s can be issued for the visiting performers.  This is the third time the event has been postponed and/or moved. Purchased tickets will be refunded over the next few days. For any further Information please contact Paris Rogers TAFMF Festival Director at 647-852-4072 or INFO@torontoafricanfilmmusi
Post a Comment
Read more

Science and the King and Queen Competition 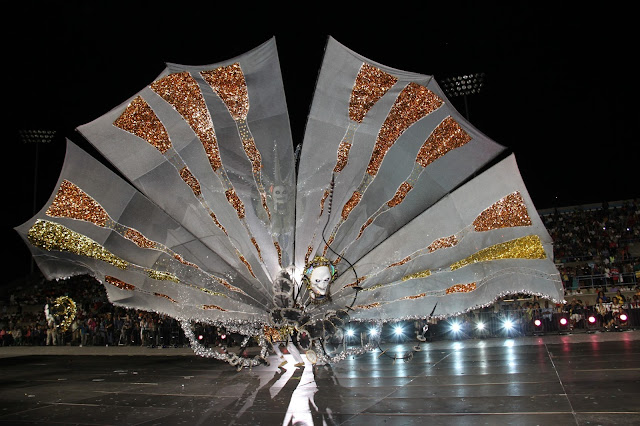 .  The Award for Innovation in Mas Goes to ‘The Hyper-Physical Being’   Hyper-Physical Being - photo by Anthony Berot   Toronto, ON (August 2, 3013) – With its ambiguous coils unraveling outwards and colourful wings reaching upwards, “The Hyper-Physical Being” is the winner of the Ontario Science Centre’s Award for Innovation in Mas presented last night at the King and Queen Competition at Lamport stadium. The spectacular creation was designed and built by Danzo Balroop and the team at Louis Saldenah’s Mas-K Club. The judging panel was made up of Walter Stoddard and Bernie Hillar of the Ontario Science Centre’s Science Content and Design B ranch, and Dr. Marsha Haynes, Medical Liaison for Merck Canada, who participated in many carnivals in her native Trinidad. “Tremendous research, problem-solving, experimentation and collaboration were clearly displayed at every camp we visited in the days leading up to the competition,” said Walter Stoddard. “’The Hyp
Post a Comment
Read more 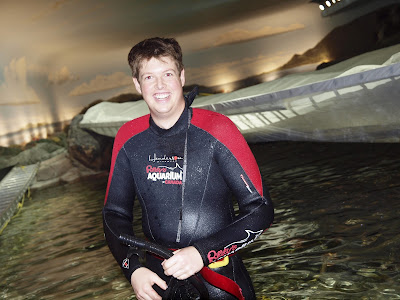 worker in the shark lagoon - Toronto DIVER MAGAZINE FACTOIDS §       There is a gift shop and food services in the aquarium. They are prepared to accommodate meat eaters and vegetarians §       The Aquarium will be open 365-days-a-year, starting in the early fall of 2013 §       The 96-metre-long (315 foot) moving walkway through an acrylic tunnel – which you will be able to step off and admire the sharks will be, according to Ripley’s, the longest indoor underwater tunnel in North America. §       Ripley’s has two other aquariums – one in Myrtle Beach, S.C., and the other in Gatlinburg, Tenn. §       Robert Ripley was a cartoonist, an adventurer and collector. He was born in 1890 in California and died in 1949.   His Believe It Or Not cartoons continue to be published. Two recent panels show a bull shark fetus with two-heads and a one-eyed shark (called Cyclops the Shark). Neither are coming to Toronto! §       Ripley’s Aquarium has pledged not to have
Post a Comment
Read more 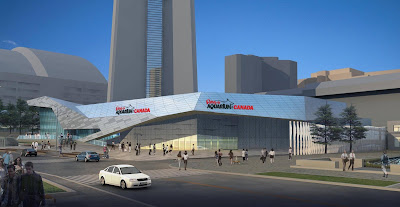 Toronto, Believe It Or Not, You’re Gonna Get An Aquarium. Any Day Now! By Stephen Weir For once, the corporate name really does say it all.   Ripley’s is about to open a new aquarium in Toronto, and given the number of companies that tried and failed, it really is a case of Believe it Or Not!   The Toronto Aquarium - How it Will Look This Fall Construction continues on the Aquarium. The base of the CN Tower in back “Yes we have been working non-stop on this for almost two years, but the project has been a ten year struggle.” said Andy Dehart, the Ripley’s shark expert who is overseeing the daily arrival of live fish at the soon-to-open aquarium.   “Some people thought it would be built in Niagara Falls, with our other properties {the Ripley’s Museum and the Great Wolf Lodge), but here we are at the base of the CN Tower, only a few weeks away from (our debut).” Several companies have been jockeying to build an aquarium in Canada’s largest city
Post a Comment
Read more
More posts