Showing posts from May, 2018
Show All

No Cafeteria bowling for Canada’s brand new Professional International Cricket League Professional International Cricket is coming to Toronto this summer.   A six-team league, including a team from the Caribbean, has been created and a new Indian based marketing company has come on board promote and broadcast the Global T20 Canada Games next month. Last Thursday a press conference was held in North Toronto to introduce Global T20 Canada, the new professional league in the Twenty20 format. International stars Andre Russell ,  Shahid Afridi ,  and  Dwayne Bravo  are names the league predicts could well headline Global T20 Canada. “This (the new league) is not just sports entertainment, it is also a primer to help get Canada ready for the 2023 World Cup,” said Bajun Canadian Jason Harper.   The CEO of last year’s Tridents Pride of Barbados T20 Cricket Team is the Tournament Director for the 22 matches set to play in the GTA June 28 to July
Post a Comment
Read more

Another junior carnival launch this weekend in Toronto 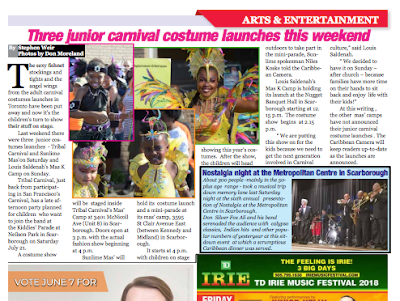 Toronto   Caribbean Carnival Costume Fashion Shows The feathers, the fishnet stockings, the tights and the angel wings have been put away and now it’s the children’s turn to show their stuff on stage.  Now that  the eleven Toronto Mas Bands have held their late night costume launches,  it is time weekend costume daytime launches for children wanting to take part in this year’s Junior Carnival and Family Day. The costumes that are being shown in the Mas Camps are what youngsters will be wearing when they take part in the Junior Parade. Often called the Kiddies Costume Parade, the event is put on the by Toronto’s Mas Bands and volunteers from the Toronto Caribbean Carnival and will be held on Saturday July 21 st at Neilson Park in Scarborough.  Over the past weekend two large Mas Camps staged parties and fashion show for youngsters and their parents. Both the Toronto Revellers and Carnival Nationz report strong interest from parents and their children in the cost
Post a Comment
Read more
More posts