Atlantic Mas Jumps Up For BLM In Downtown Toronto

400 reasons to listen to Reggae Music out front of the American Consulate!  Atlantic Mas puts on  carnival style BLM demonstration 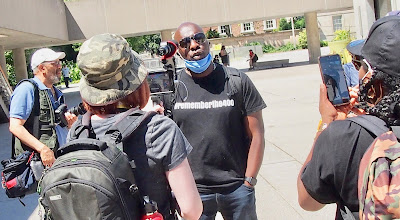 By Stephen Weir for the Caribbean Camera

In Toronto this year’s Fourth of July was marked with a Caribbean style protest parade through the downtown streets. And, maybe because a Mas Camp from the Toronto Caribbean Carnival organized the event, this was a protest that managed to score important political points along with a good dash of Jump Up.
The Atlantic Mas bandleader Akil Heywood spoke to the media in an hour-long media scrum outside of the Toronto city hall last Saturday morning.
There have been many Black Lives Matter (BLM) demonstrations in Toronto this year, but Heywood noted to the Caribbean Camera that there has been little or no representation from the Caribbean community.  Turn up the Soca and Reggae music that all changed after the media scrum ended and the afternoon protest march began.
Talk about a demonstration with Caribbean panache, this one had it all.  Two hundred or more placard carrying protesters walked a circuitous route on sidewalks and streets from City Hall to Queens Park and back. Chanting and waving signs, it was all done to the sounds of Caribbean music playing from a trailing sound truck à la Caribana style. 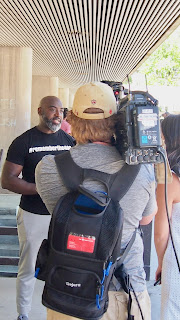 The parade stopped three times to listen to speakers; once outside the United States Consulate, once at police headquarters and the other outside the legislature at Queen’s Park where protestors chanted “Black Lives Matter.”
Heywood promised a demonstration that would be violence free, and, he delivered. The music and high spirit of the marchers, coupled with police wearing summer shorts and riding bikes lazily alongside the protesters gave the event a much different vibe than what the Camera has experienced at other protests this summer.
“The music is an important part of the protest,” Heywood said prior to the start of the parade. Soca, Calypso, and Reggae, have elements of social and political resistance embedded in the song lyrics … that music has to be with us today.”
Downtown pedestrian responded by cheering on the Atlantic Mas paraders. Motorists slow driving in downtown traffic, honked and waved out their windows in support of the protesters.
“The parade started rolling around 1:40 and it took us a solid 3 hours to complete the "slow chip" with the speaking stops. It was a really good time and educational,” said photographer and long-time Toronto Caribbean Carnival volunteer Shawn King. “ Akil Heywood has taken an (impressive) leadership role beyond that of a simple bandleader/entrepreneur.”
The protest touched on all the hot buttons of the   Black Lives Matter movement. “Black people have endured oppression, violence, and ultimately death, as a result of anti-black racism for centuries,” said Heywood in a written communication sent to the to the paper. “There is a worldwide outcry demanding change and justice for the innocent lives lost.” 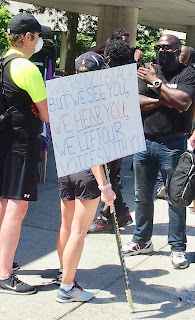 Atlantic Mas did give out a lengthy manifesto to the media, when boiled down the five reasons for the afternoon long action were:

1. The need for the city and school boards to adopt Anti-Black Racism.
2.  Accountability within the GTA Police
3. Development of an Anti-Racism Committee
4. Implementation of Afrocentric Courts in Canada
5.  Credit Programs to help build wealth with the community.

Joining Atlantic Mas at the parade were members of the Remember The 400 association. The 400 is an awareness campaign that was formed to commemorate the 400th anniversary of the first arrival of African slaves that were brought to the shores of North American on August 1619.   Canadian movie and TV actor Shadrock Porter formed this non-profit group.
Remember 400’s spokesman Tyrone Swaray helped out at the pre-parade scrum giving to interviews to the media. "There are some times when we do need the police and we understand why police forces were set up in the first place," he said. “"It's not hidden, everyone knows what's been happening to our people." 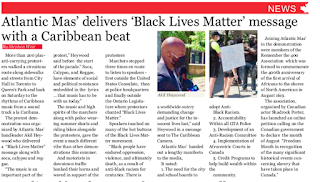 In addition to their political activism Remember the Four Hundred has launched an online petition calling for the government to make the month of August "Freedom Month," in recognition of the many significant historical events concerning slavery that have taken place in this country.