Showing posts from June, 2010
Show All

Cupid has an angel's touch. Teaching visitors to the Science Centre about the heavenly sounds of the Pan 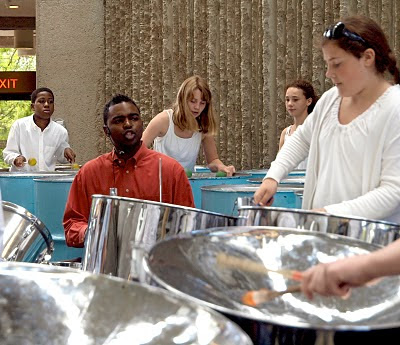 . Scotiabank Caribana Programming at the Science Centre in June 2010 The secret to playing the steel drum? Don't bang the instrument with your "sticks", roll them across the surface of the metal ... or so says pan expert Salmon Cupid. Cupid, a music teacher within the Toronto District School Board is also the inventor of the E-Pan, the world's first electronic steelpan. On Friday morning he was at the Ontario Science Centre with 20 sets of steel pans and his E-Pan. The Ontario Science Centre has become a partner in the annual Scotiabank Caribana Festival. The Science Centre sponsored Salmon Cupid's visit to their building. Cupid had the help of a number school aged players and also called up members of the auidence to come up and learn all about the steel pan. The steelpan, also known as the steeldrum, is an invention that was made in Trinidad and Tobago. It is an acoustic musical instrument indigenous to that nation which remains to this day, the only su
Post a Comment
Read more

G20 - One Billion, The Arts - No Score. Ancient Terracotta Warriors will have to wait a bit longer to be discovered by the media 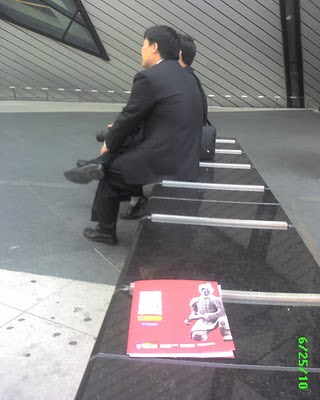 . G20 - One Billion, The Arts - No Score. Terracotta Warriors will have to wait to be discovered by the media Everyone was there for the press preview of the Terracotta Warriors this morning at the Royal Ontario Museum in Toronto. There was the Cultural Minister from the British Columbia provincial government, Michael Chan, Ontario's provincial minister of culture and tourism, the head of the Vancouver Art Gallery, the head of the Glenbow Museum, the head of the Montreal Museum, vice president of the Bank of Montreal, a gaggle of high ranking Chinese government officials (and their translators) but, not counting the Chinese language TV and print, there was no mainstream media. Good show. No Hollywood (like the Art Gallery of Ontario's Tut exhibition -- with the voice of Harrison Ford and movie set entrance doors), just a dynamic, well thought out and tastefully presented exhibition. The media should have lapped it up. According to Wikipedia,"The Terracotta Army is
Post a Comment
Read more 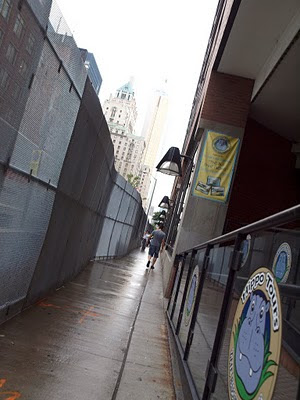 . Demonstrators Already Claiming Victory in G20 Battle http://torontoist.com/2010/0/demonstrators_already_claiming_victory_in_summit_battle.php Boarded-up shop windows surround King Station. Photo by Stephen Michalowicz/Torontoist. Unless you've been living under a rock this week—and let's face it, with the security clampdown, lots of people downtown feel as though they are—you've noticed that the core of the city has been brought to a virtual standstill. Some streets are so vacant, you could use them as bowling alleys. Employees have been told to stay home. Shops are closed (some are even boarded up), the daily subway commute feels more like a Sunday afternoon than morning rush hour, and people are talking openly about leaving town for the weekend. Turning the country's biggest city into a ghost town is quite a feat. To some protesters, that's a major victory—and it's been won before the actual summits even begin. "Definitely the Harper government and
Post a Comment
Read more

. The World’s Worst Underwater Magician Hocus Pocus, Kodak High Def Underwater Video Camera Still in Focus Story filed with Diver Magazine June 8, 2010 By Stephen Weir The Pixel Wars are over, picture resolution can’t get any higher. Now the race to produce pocket sized high definition waterproof video cameras is on. One of the first out of the box is the Kodak PlaySport. In April the venerable film manufacturing company began selling in Canada and the US, a High Def video camera that looks like a cell phone, works underwater without a housing and easily links in to You Tube and Facebook. “It is brand new and just became available to consumers,” explained Kodak’s PR console, Carla McFarlane.” Major retailers are just receiving their inventory now since the product is so new (but soon it should be available everywhere). It is available in purple, blue and black.” According to Kodak their PlaySport is built for people who enjoy the outdoors. It is waterproof to 3-metres without
Post a Comment
Read more 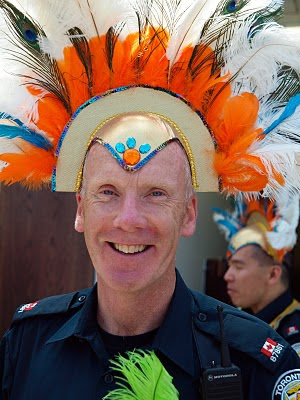 . Police, children, volunteers and the Scotiabank Caribana Festival stakeholders were at the Jane Finch Yorkgate Mall in Toronto to open the Toronto Police Junior Mas Camp Senior Officer Superintendent Sam Fernandez from 53 Division officially opened the Metro Toronto Police Force’s Mas Camp for Children on Monday May 31st at the Yorkgate Mall (Finch Avenue East at Jane St). He was joined by children were at the camp to learn how to make mas (masquerade) costumes for this summer’s Scotiabank Caribana/Yorkgate Mall Junior Carnival Parade. The camp is located in an empty Macdonald's Restaurant on the second floor of the Mall. Toronto Revellers Mas Band leader and NBA star Jamaal Magloire was at the Mall to help open the Metro Toronto Police's first ever Mas Camp for Kids. He spoke briefly to the children and the press and then signed autographs. Tony Ishmael, one of the founders of the Caribana Junior Parade and a costume designer for the Toronto Revellers Mas Camp, spoke a
Post a Comment
Read more
More posts