Showing posts from November, 2010
Show All

Jill Heinreth: A Canadian life where blue is anything but Jill Heinreth: A Canadian life where blue is anything but
By Stephen Weir

It's like going next door to borrow a cuppa sugar and coming back with filet mignon. It is not what you wanted, but who is going to complain. Whenever Jill Heinreth speaks at a Niagara Falls wreck diving symposium, you can pretty well count on her talking about anything other than Great Lake shipwrecks - but, that is okay, the audiences adore her!
Earlier this year she was the headline speaker at the 16th annual Niagara Divers' Association Shipwreck Festival in Welland, Ontario. While people like wreck hunter Dave Trotter and Georgann and Mike Wachter showed film from their latest fresh water discovies, Jill got up on stage and talked about why divers die using rebreathers! A few years before at the same wreck-heavy conference Jill wowed the audiences with stories and pictures of her dives in Mexican caves and Antarctic iceberg fissures!
The audience in Welland, Ontario love her. She has spoken twice and p…
Post a Comment
Read more 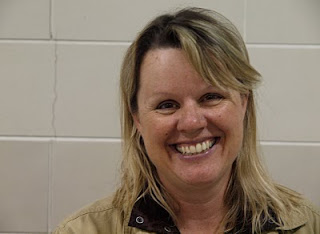 Sidebar to the Diver Magazine feature
http://stephenweirarticles.blogspot.com/2010/11/jill-heinreth-canadian-life-where-blue.html
By Stephen Weir

Heinreth’s numerous milestones include induction to the Women Diver’s Hall of Fame and being named a living legend by Sport Diving Magazine. She was named Canadian Technical Diver of the Year, and holds various pioneering diving records. She won the STAND Award for Environmental Photography in 2008. Among her many documentary film making awards are the Cine Golden Eagle and a Redemptive Film Festival Storyteller award. Jill is consistently among the top winners of many prestigious photography competitions and salons. 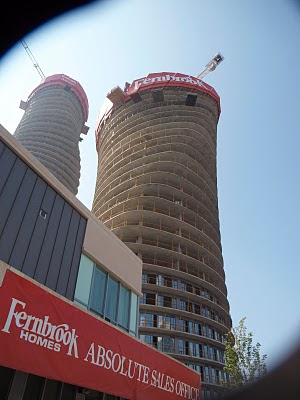 STORY APPEARED ON-LINE IN THE TORONTO STAR ON FRIDAY DECEMBER 3RD. STORY IS AN EDITED VERSION WITH WHAT APPEARS BELOW AND HAS DIFFERENT PHOTOGRAPH OF THE MAYOR
READ IT AT:http://www.yourhome.ca/homes/realestate/article/898124--marilyn-monroe-s-concrete-body-now-finished
This is a follow-up story to the large How Is It Built Feature published by the Toronto Star earlier this fall.
http://stephenweirarticles.blogspot.com/2010/09/marilyn-monre.html


Mississauga mayor says it is only the beginning
By Stephen Weir

Hazel McCallion believes that the "topping-off" of the 56-storey Marilyn Monroe condominium is a giant step in making Mississauga a “Global City”. The mayor says the completion of the new 428-unit curvy cement and glass building is the making of an iconic attraction that will bring more boldly designed high-rises to the city and create a tourist attraction!
“ This building has already set a new standard for design in Mississauga!” Mayor Hazel McCallion told a happy crowd o…
1 comment
Read more

.
OTTAWA HAS THE SCOOP ON INDOOR AND OUTDOOR ACTIVITIES THIS CHRISTMAS INCLUDING A COYOTE NATIVITY PLAY

Visitors to Ottawa have plenty of choice this winter whether they want to stay inside or outside. This December, the Ottawa region will be energized by the lights of Christmas, outdoor skating, the Nutcracker and, of course, hockey! And if you book your hotel or getaway package before March 31, 2011 , you can enjoy a 3rd night free at participating hotels. Visit www.ottawatourism.ca for full details on this as well as the other special offers and packages available.
Over the coming weeks, Ottawa will play host to Christmas Lights Across Canada; performances of The Nutcracker and Nativity: a Coyote’s Christmas at the National Arts Centre, The Bell Capital Cup hockey tournament and the 41st skating season on the Rideau Canal Skateway where visitors can skate, for free, on the world’s largest outdoor rink.
For the past 25 years, Ottawa has had a Christmas lights festival to brighten the O…
Post a Comment
Read more

Maori elders greeted the dawn and then rubbed our noses in it! 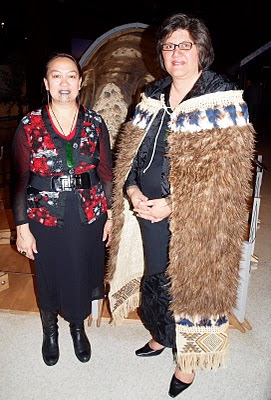 .
WHALE SHOW OPENING BEGINS AT DAWN IN A PARKING LOT AT THE ONTARIO SCIENCE CENTRE

A few minutes into the official opening of Whales | Tohora, a Maori elder told the invited audience that at one time her people were fierce hunters of whales. But, she said, the Maori have changed their ways and are helping the scientific community in New Zealand study the world's largest creatures.

Whales | Tohora is a new travelling exhibition that just rolled into Toronto. Opening at the Ontario Science Centre, the whale show includes two enormous, fully-articulated sperm whale skeletons, life-sized reproductions and a crawl-through model of a whale heart.
Objects in this 750 square metre exhibition include rare specimens from the Museum of New Zealand Te Papa Tongarewa's whale collection, one of the largest in the world. In addition to the science and biology of whales, Whales | Tohora explores the cultural and historical significance of these creatures to the Maori and Pakeha (non-Maori) cultur…
Post a Comment
Read more 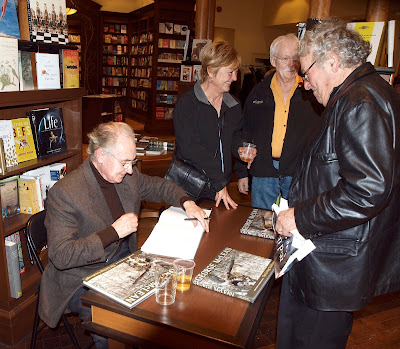 McLean is one of Canada’s finest wildlife artist. His technical prowess, his affinity for his subject matter, and his densely layered depictions of the natural world emerge directly from his intense interest in wildlife.
Now in his seventies, his passion for the creatures and the habitat that surrounds him is as intense as it ever was, as is his desire to share his passion with others through his art.
In this new book, Tom Thomson Gallery curator Virginia Eichhorn, examines the development of McLean’s art and trace his varied influences, casting his work in the light of early 20th-century artists Carl Rungius , Bruno Liljefors, and Andr…
Post a Comment
Read more
More posts