It sounds like the Clash of the Pitons!
Toronto Caribbean Camera 07.30.2020
By Stephen Weir
Three of St. Lucia’ s top soca artistes are going to face off in studio on Friday on the first ever Carib Beer Canada Sound Clash.
Soca artistes Ricky T, Cooyah, and Umpa are going live at 8pm on an online broadcast created just for Canadians celebrating Carnival week.  It is a chance to see three international performers who have been missing from the summer Soca music scene here in Toronto because of the Virus shutdown.
A Sound Clash, by the way, is a musical competition where crewmembers from opposing artistes pit their skills against each other. The planned one-hour unscripted show will be taking place inside a St. Lucia recording studio.
“We are going to have some fun with the Clash, it is meant to be a cool thing for our fans to watch, here at home and in Canada,” Ricky T Thomas told the Caribbean Camera earlier this week. “It is this Covid 19 thing that we are all trying to shake off with our music. There is no Carnival anywhere, so we hope the viewers in Toronto will dust off last year’s costumes and dance to our music!”
Undoubtedly the most successful Saint Lucian Soca artiste to date, Ricky T is also the most toured with concert appearances throughout the Caribbean, the US, the UK and Canada.
His rallying cry “Wham to Dem!” is immortalized on the 2007 hit “Pressure Boom”. It has become as synonymous “Ricky T” as that monster hit that took him from Saint Lucian stages to the Trinidad Soca Monarch finals and later Madison Square Garden in New York where he performed alongside Trinidad Soca legend Machel Montano. He promises that he will perform all his hits and a few new surprises too on the 31st!
Ricky T’s wife and daughter are here in Canada, but because of ongoing Virus travel bans, he doesn’t know when he will able to come to Canada.  “ Basically I am here with my young daughter Rackel in St Lucia, doing new material and getting her into the studio. I got more time to think and read and see things differently because of this (pandemic).” 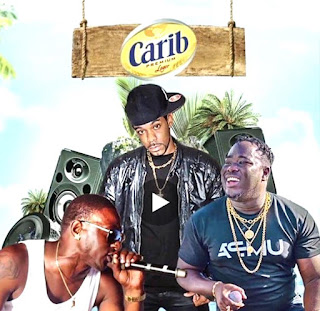 Kendal Poliusor (aka Cooyah) sings in both English and Kweyoi. His 2018 hit single Rev It Up has close to half a million views on YouTube and continues to get airplay. Songwriter and performer Umpa has already taken to Instagram to tell his follower he is coming at Ricky T with his new 2020 hit The Dennery Anthem.  (Dennery is a town and district on the east coast of St Lucia).
The three singers are grateful for Carib Beer, Grace Food and St Lucia Tourism for bringing Ricky T, Cooyah and Umpa into the studio and in front of Canadians.  “ I know Carib Beer is very popular and readily available in Canada for 70 years so I am not telling you readers anything they don’t know,” said Ricky T. “ I think Friday is a chance to raise a glass for our music, our culture and of course Carib Beer!
The live broadcast will be streamed Friday July 31st at 8pm at https://bit.ly/3eIdJpm and on social media at: @CaribBeerCanada
carib beer clash of the titons Cooyah Dennery Anthem Machel Montano ricky t sound clash soundclash Umpa Wham to Dem