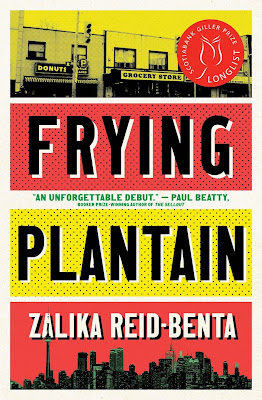 Two Days in June. Two $10,000 prizes.  Last month young Zalika Reid-Benta won two different literary Prizes in the space of two days!  On June 25th her book, Frying Plantain won the $10,000 Kobo Emerging Writer’s Literary Fiction Prize.  The day before it was announced that she had won the Writers’ Union of Canada’s annual  $10.000 Danuta Gleed Literary Award.
Zalika Reid-Benta, a Toronto-based Jamaican Canadian novelist, burst onto the literary scene last year when the House of Anansi Press published her first book.  Her debut story collection Frying Plantain is a series of linked short tales centering on the coming of age of Kara Davis, a young Jamaican Canadian girl growing up in “Little Jamaica” (the Eglinton West neighbourhood in Toronto.)
Kara is caught in the middle between her Canadian identity and her desire to be a “true” Jamaican. She lives through her mother and grandmother’s rages against the changing times. She also survives the life lessons of having to avoid being thought of as too “faas” or too “quiet” or too “bold” or too “soft.”
Kara moves from girlhood to the threshold of adulthood, from elementary school to high school graduation, in a dozen interconnected stories. Set in both Toronto and Jamaica, this is a rich and unforgettable portrait of growing up between worlds.
Zalika Reid-Benta was born and raised in Toronto. She studied at the University of Toronto and New York City’s Columbia University. She currently works as the program manager at Diaspora Dialogues, a Toronto-based organization for emerging writers of colour. She is currently working on a young-adult fantasy novel drawing inspiration from Jamaican folklore. 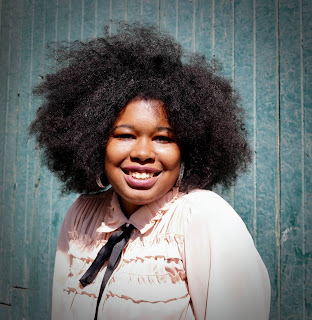 The 23rd annual Danuta Gleed Literary Award recognizes the best first collection of short fiction by a Canadian author published in 2019 (and chosen in 2020) in the English language.
Rakuten Kobo, the Toronto based global eBook and audiobook online seller also presents $10,000 awards to new Canadian writers.  It recognizes exceptional books written by first-time authors in three categories: Literary Fiction, Genre Fiction and Nonfiction.
What a book! Zalika Reid-Benta's Frying Plantain was also longlisted last year for the 2019 Scotiabank Giller Prize and shortlisted for the 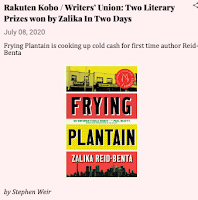 2020 Trillium Book Award. Frying Plantain is also in the running the upcoming 2020 Forest of Reading Evergreen Award presented by the Ontario Library Association.