Showing posts from June, 2012
Show All

June 19, 2012
Being Ousted from the Best Seat at the Griffin Poetry Prize Bernard Gauthier (Bravo TV) and myself arrived early at the Griffin Poetry Prize award dinner in Toronto on June 7. The Distillery District hall doors had only been open for a few minutes. We were one of the first to be welcomed by Scott and Krystyne Griffin, the founders and funders of the Griffin Trust for Excellence in Poetry. The prize is the largest annual award for a single book of poetry in the world. I had trouble hearing our hosts because of the Mexican mariachi band that had just begun to tune up. I am sure I would have heard all the details about the seating arrangements if I leaned a little closer in. We entered the large exposed brick space that was once used for the fermentation of millions of gallons of liquor. The room soon began to fill with everyone I have read in the past 10 years. Michael Ondaatje, Margaret Atwood, Christopher Dwedney, Richard Gwyn. There were TV stars journalists, and former governor
Post a Comment
Read more

For some members of the police and the media, Caribana is code for black 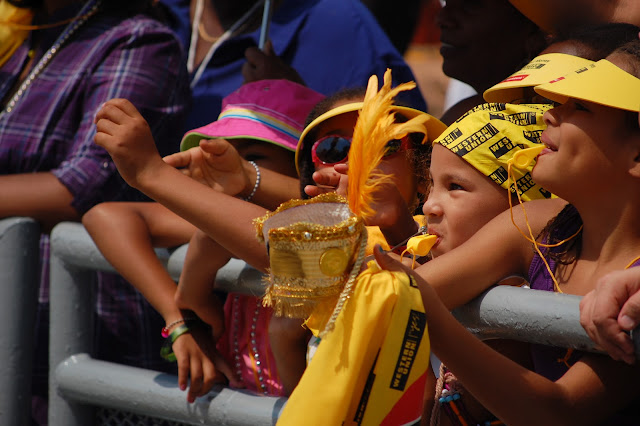 Spectators at last year's Caribbean Carnival Festival parade in Toronto Media manage to quickly link Eaton shooting with North America's largest Caribbean Canadian festival Late last week I joked with my associate Craigg Slowly (@ThatTDotGuy) that it would be only a matter of time before CFRB right wing on-air host Jerry Agar would link the Eaton Centre shooting with the Caribbean Carnival Toronto (the carnival formally known as Caribana). Don't know if Agar has taken a run at us yet, but, other media outlets have indeed made the tenuous link between an inner-city gang shooting at the Eaton Centre and North America's largest Caribbean cultural event. The Globe and Mail on Saturday did a feature on public safety at Yonge and Dundas and somehow managed to use the Caribana name.  The reporter, Kelly Grant, listed some of the murders that had occurred near the Dundas / Yonge intersection. In that list was the 2005 murder of a Brampton man in Dundas Squa
2 comments
Read more
More posts