By Stephen Weir
A long anticipated and much delayed award ceremony took place on line over the past week. The JUNOS, which honour Canada’s best recording artists, were originally scheduled to be given out on stage in Saskatoon in mid-March but were cancelled because of the Virus lockdown.  On Monday evening the 42 JUNO Awards were presented online.
The big winners were  singer-songwriter Alessia Cara (3 awards) and Sean Mendes (Single of the Year Award). For the second year in a row, nine-time JUNO Award winner Avril Lavigne won for JUNO Fan Choice
Three Caribbean Canadian performers from the GTA were nominated for Junos in the categories of Reggae, R&B /Soul Recording and Rap. 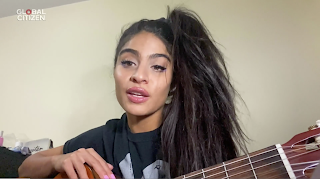 Brampton’s Daystar Peterson (aka Tory Lanez) Tory Lanez maintained his reign of the Rap Recording of the Year category, marking his third consecutive win, as well as being the first artist to win in both the Rap Recording and R&B/Soul Recording category (where he was a co-winner alongside  Jane and Finch’s
Jessie Reyez) in the same year.  The 27-year performer’s parents are Bajan and Guyanese.

Longtime Reggae performing artistes  Jay Douglas (Jah Children) and Exco Levi were competing against each other in the Reggae classification.  However, neither won, the JUNO went to Lyndon John X for his song, The Warning Track. 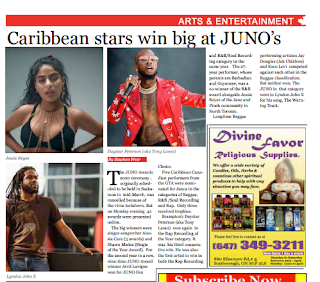