Showing posts from April, 2013
Show All

The opera SALOME opens in Toronto

VIDEO: Stephen Weir interview Atom Egoyan. A short film by George Socka  . Headless in Judeau – Atom Egoyan Dials Back the Kink By Stephen Weir   Curtain Call - Dress Rehearsal For Salome - Canadian Opera Company - Toronto Photo by George Socka Article appeared  first in Huffington Post: http://www.huffingtonpost.ca/stephen-weir/headless-in-judea-atom-eg_b_3132312.html Atom Egoyan believes it wasn’t adolescent angst that made a young princess demand the head of a   prophet as payment for dirty dancing in front of her stepfather.   No, says the Canadian filmmaker ( Exotica, The Sweet Hereafter , Chloe ) who is back directing the revival of the opera Salome, it is all about voyeurism, frustrated desire, paranoia and the decay of the human soul. The Canadian Opera Company’s 8-performance run of Oscar Wilde and Richard Strauss’s Salome, at the Four Seasons Centre For The Performing Arts in Toronto, marks the return of the celebrated Canadian director.   This is the th
Post a Comment
Read more 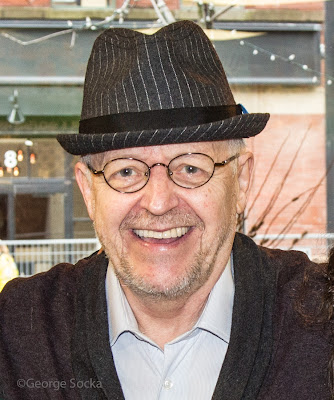 Cue the actor. Eric Peterson to receive Order of Canada - Socka You Knew He Was Important Because Of The Size Of The Camera Crew I knew that the film crew of six had to be from the National Film Board . It was 8am on Saturday at the St Lawrence Market, and the crew members were flush with the knowledge of earning time and half pa y.  They were all men. Of course. They were all in the 30s. They all looked like they had worked for the Peace Corp - a few steak dinners ago. Old jeans, but pressed. And of course, the pre-planned 5 o'clock shadow that requires you to shave at 9 oclock the evening before to look like a real player!   Who else but the National Film Board could afford to go this big, this early? Who else could afford a camera man, a sound man, a director, a man with a monitor around his neck (and a cool hood to let him watch the action in the dark), a model release guy and some other man that looked for suckers to fluff up and interview? Sigh. I w
1 comment
Read more

GEORGE HUNTER, PASSES AT 91 George Hunter,  a  Canadian photography pioneer, has passed away in Mississauga at the age of 91.  Hunter, a long-time National Film Board photographer captured the disappearing nomadic Inuit way of life in Canada's Arctic.   His career spanned 70 years and took pictures all over Canada, the United States and the world.  he considered himself as a visual historian and  "Canada's Location Photographer". Two of his pictures have been used on Canadian paper bills - salmon ($5 bill) and a petro-chemical plant ($10 bill). Hunter took pictures for many news sources and high profile clients including the Winnipeg Tribune, Expo 67, and the Royal Family.  In the fifties after leaving the National Film Board, Hunter learned how to fly, purchased a Piper Cub and soon became an expert at low-level photography.  In the 60s he built a photography bus (complete with a 7 metre ladder on the roof for high-angle shots) and spent ten years traveling a
3 comments
Read more 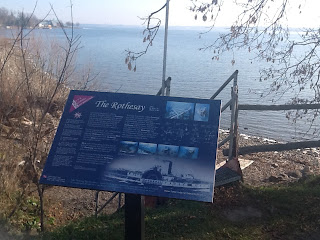 Best Dive Sites In Canada :  This month's Diver Magazine is completely dedicated to showing divers were the BEST spots to dive in Canada.  I contributed with the best sites in Ontario.  Due to space reason, not all the sites made it into print.  What follows are  all my 5 favourite spots to dive in Ontario - two that you would not have seen if you  read the Diver Magazine article.  Best/Easiest Shore Dive in Ontario What:           The wreck of the twin side-wheeler Rothesay Where:          Shipwreck near the shore. North side of the St Lawrence River. Prescott, Ontario.   Town of Prescott has made it easy for divers to visit the wreck. There is free parking, a port-a-potty and a privacy wall for changing. This park for divers is at the intersection of Highway 2 and Merwyn Lane, west of Prescott. Divers can see the markers for the wreck from the riverside park. Why:                    The 61 metre long Rothesay is a very popular checkout site for divers from Qu
Post a Comment
Read more
More posts