Showing posts from April, 2010
Show All

Loose Moose eat shoots and leave(s) for the cameras

. Gorham's coach tours have a 94% chance of seeing a photo-friendly moose or two There is more chance of seeing a moose on the loose while taking part in a Gorham Moose Trail tour than basking in sunshine on a visit to the beach! The 174-year old town, nestled in the Androscoggin Valley and adjacent to the picturesque Presidential Mountain Range, have a 94% successful sight rate when it comes to close encounters of the Moose kind. Gorham is surrounded by the White Mountain National Forest and the spectacular Mt. Washington and Great Glen Outdoor Center are only eight miles away. Tourists should not miss the unique opportunity to take the Gorham Moose Tour in search of the giant of the North Country and other area wildlife, including deer, osprey, eagles and more. Climb on board a comfortable, air-conditioned, 15 or 21-passenger tour bus for a 3-hour tour along the picturesque Androscoggin River and into the 13-Mile Woods Area. There are daily tours throughout from May to Octob
Post a Comment
Read more 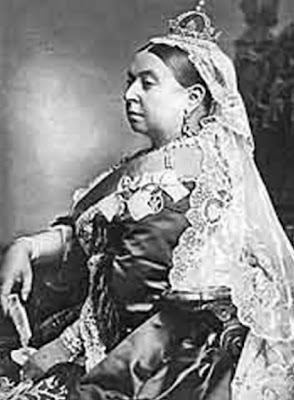 QUEEN VICTORIA WOULD BE AMUSED BY ALL THE DEALS FOR HER SUBJECTS The Canadian dollar is on the rise and so are the savings in New Hampshire. The Granite State appreciates the business and visitors it receives from Canada and many properties are offering up discounts and other added value items for the Victoria Day weekend and some extending it throughout the spring or even summer. Check out www.visitnh.gov for all the latest information and packages or visit the websites listed after each package below for specific details. * Appalachian Mountain Club Highland Center/Joe Dodge Lodge -Bretton Woods, NH Enjoy the outdoors at the Appalachian Mountain Club's Highland Centre and Joe Dodge Lodge and book May 22-24 and save 50% off their regular rate for the second night during this time period. You must mention promo code "VDAY" when you call (603) 466-2727 for reservations. Offer only available by phone. Lodge details at www.outdoors.org/whitemount
Post a Comment
Read more 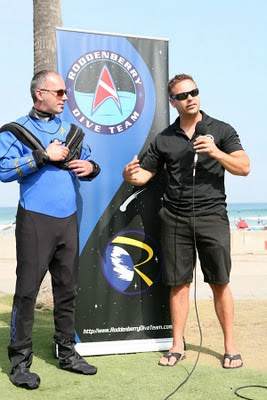 . BUY THE DECAL. WEAR THE SUIT. JOIN THE CLUB. The Final Frontier begins with the Roddenberry Dive Team By Stephen Weir, Diver Magazine BEAM ME DOWN SCOTTY. Space may be the final frontier for astronauts, but, Eugene Roddenberry, son of Gene Roddenberry the creator of Star Trek, knows that for the vast majority of people back here on Earth, the only place you can boldly go where no man has gone before is underwater. California based Eugene "Rod" Roddenberry has introduced a new line of dive suits and formed a dive club to encourage people to explore the underwater world and save the planet. Rod is hopeful that his Roddenberry Dive Team will live long and prosper. “The Roddenberry Dive Team is about exploration, adventure and education,” the club founder wrote on his website. “Members can take part in regular ocean, space and science action related activities; including scuba trips to both local and exotic locations, VIP events and fundraisers, special lectures and semin
Post a Comment
Read more

Diver Magazine Exclusive: Peter Hughes sells his business to the new owner of the Aggressor Fleet 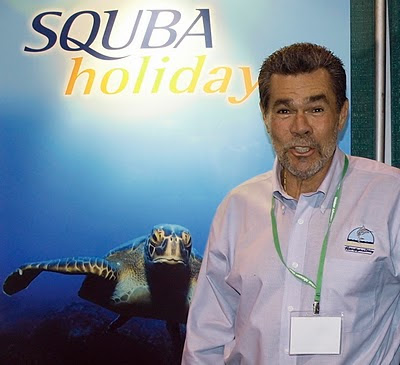 . In the Caribbean and on the Pacific and Indian Oceans Wayne Brown is the new Dance Master By STEPHEN WEIR His hand is no longer on the tiller; he is no longer the admiral of his fleet. Yes, the title on the business card says “president”, but, according to Peter Hughes, it is now Wayne Brown who is walking the Poop Deck on his Dancer fleet of live-aboard dive boats. Peter Hughes, the man who introduced luxury live aboard dive travel to North America and established four-star standards for land-based Divi operations in the Caribbean has told Diver Magazine in an exclusive interview that he has sold his company, lock, stock and dive boats. The new owner, Wayne Brown, is the owner of the Aggressor Fleet of live-aboard dive boats, Hughes’ fiercest competitor. Speaking at the Adventure Sport Exhibition in Toronto, Mr. Hughes said that he sold his operation to multi-millionaire Wayne Brown 24 months ago. “ We were very very quiet about the sale,” he said. “It was months before anyo
1 comment
Read more

. Water too cold in Toronto in April - new underwater camera tested in local pool In anticipation of the completion of a product review article that I am writing for Diver Magazine, I have shot and posted an underwater video on YouTube. http://www.youtube.com/watch?v=W83vzlzMxYA . The review is about the new Kodak Play Sport. The video camera looks like a cell phone but is in fact built to be taken underwater without a housing! Members of the Etobicoke Underwater Club assisted as I taped Marianne Collins conduct an underwater magic trick. After filming her waving her magic wand and making a flower grow underwater I decided to call her the World's Worst Underwater Magician.
Post a Comment
Read more

Toronto Star: Destruction to construction - Dust to Dust in the Condo industry

. Wrecking and recycling From a brewery to beer cans Destruction to construction By STEPHEN WEIR SPECIAL TO THE STAR HOW IT'S BUILT It is taking a lot of Molson's muscle to recycle Toronto's landmark lakeside suds factory. An environmentally bent demolition company is painstakingly deconstructing the Fleet St. Molson's Brewery, turning it into powdered concrete, ingots of steel and, eventually, aluminum beer cans. Even as the Molson building is being taken down, there are still parts of it that tower above the nearby raised Gardner Expressway. The shrinking factory is a beacon for the disappearing industrial district that once employed thousands along Toronto's eastern waterfront. The beer building and almost all other factories and warehouses in the Bathurst and Lake Shore area are being shuttered, shut down and converted into upscale housing projects. "This puppy was over-built. There are at least 3,000 metric tons of steel in there. It was as though the
6 comments
Read more 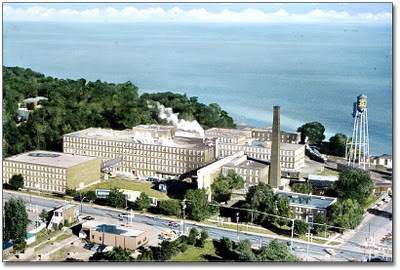 . Washington’s Urban Land Institute believes you can’t take the starch out of lakeside Port Credit condominium project By Stephen Weir When the US research organization Urban Land Institute (ULI), set out to pick the ten best land-use projects in North America, Europe and Asia, one of the 21 finalists was the Port Credit Village development on Lake Ontario's north shore. The Washington based nonprofit association vigorously likes how the privately owned Fram Building Group has transformed a demolished starch factory into a lakeside condominium project which, through its design, encourages residents to work at home, walk, ride bikes and use mass transit. The annual competition is based on ULI’s guiding principle that the “achievement of excellence in land use practice should be recognized and rewarded.” Its Awards for Excellence makes an all-encompassing holistic examination of each nominated project, looking beyond its architectural design. The criteria include: “leadership
Post a Comment
Read more 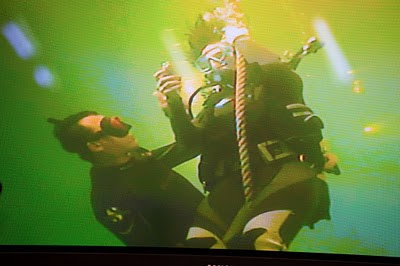 . Ukrainian Journalist, Julia Gorodetskaya, Sends World’s First Underwater Tweet WORLD'S FIRST UNDERWATER TWEET It was an unforgettable experience—to tweet side-by-side with dolphins at a depth of 19-feet underwater. Odessa, Ukraine April 19, 2010 — Ukrainian TV journalist, Julia Gorodetskaya (@gorodetskaya), recently sent the first underwater tweet from the floor of the 19-foot-deep dolphinarium, “Nemo,” in Odessa, Ukraine. The scuba tweeting session was broadcasted by local media and documented by regional press. The preparation process and the underwater tweeting was also filmed and broadcasted live by Boris Khodorkovsky (@netocrat) to his QIK account and placed on Youtube and other social media services. Julia Gorodetskaya Sends World's First Underwater Tweet The tweet was sent via a mobile phone sealed in plastic, using Opera Mini’s Web-interface of Twitter. The tweeting was organized by a national mobile operator with the help of professional divers, who prepared t
Post a Comment
Read more 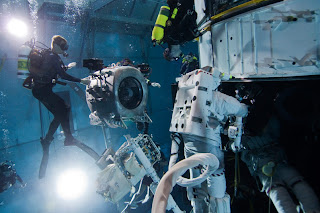 . HUBBLE HOOPLA COMES TO ONTARIO SCIENCE CENTRE, HUBBLE FILM'S DIRECTOR OF PHOTOGRAPHYSAYS IT TOOK 20-YEARS TO GET 8-MINUTES OF SPACE FILM James Neihouse, the director of photography for the Hubble Imax film, was a down-to-earth fellow while fielding out-of-this-world questions from the media at a March Toronto press preview held at the Ontario Science Centre. The Canadian film maker talked at length about two decades of challenges he faced in getting useable large format space footage for the movie. Niehouse said the film about the in-space repair and update of the orbiting Hubble Telescope, took 20-years to make and yet has only 8-minutes of IMAX quality out-of-this-world footage. Why? The camera, weighing over 300 kilos, went into space onboard a US shuttle loaded "with just 5,400 ft of film. That's all we could get on board and in the camera!". (footage from helmet cameras and shuttle cameras flesh out the spectacular film). The Shuttle could not accommo
Post a Comment
Read more
More posts