Showing posts from August, 2016
Show All

Brockville's Brand New Riverside Attraction for Divers and Shipwreck Fans! It only makes sense that Dave Sheridan, diver, underwater sculptor and educational Programmer at Brockville’s Aquatarium , would use the word anchor when talking about the new riverside shipwreck museum and aquarium called the Aquatarium . “ This is the city’s anchor attraction – not just for divers but for all tourists who have an interest in history, aquatic life and, of course, shipwrecks” said Dave Sheridan. “The new Aquatarium has the look and feel of the Thousand Island.    Anyone who has taken a island tour will have seen the historic Bolt Castle   - the Castle’s boat house is the   architectural inspiration for what we have here.”   Dave Sheridan by Otter Tank  - Weir The $25-million, 27,000+ sq. ft attraction is a learning and discovery centre located on the waterfront in the heart of Brockville.   There are fresh water fish filled aquariums, underwater shipwreck exhibition
Post a Comment
Read more 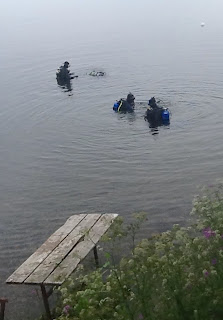 All about the Diving in and around Brockville, Ontario. Sidebars written for Huffington Post Blog August 2016. By Stephen Weir Popular Shore Dives in and around Brockville, Ontario   Shore divers head to the Rothesay Rothesay – Wooden Sidewheel Passenger Steamer. Sank in 1889. 300 ft from shore. Augusta Township(west of Brockville) has built change rooms and a park off Highway 2 for divers. The Wee Hawk - work barge sunk in the 50s.   70 ft long, 20 ft down. Near the town of Cardinal west of Brockville on Highway 2. Wreck accessed from shore at the unused Galop Lock two.   Nearby is the Conestoga Wreck and both can be dove on a single tank of air. Conestoga Wreck. 252 ‘ long steamer. Upright, parts of the ship are out of water. She is 10’ feet from shore.   Maximum depth 28.   She was built in 1878, sank in 1922.   ABUC's EMILY C Dive Boat - photo Helen Cooper Brockville area shipwrecks – boat dives Sir Robert Peel. Sidewheel steamer. Depth 135
Post a Comment
Read more

Getting Fresh Water - DIVING in Brockville 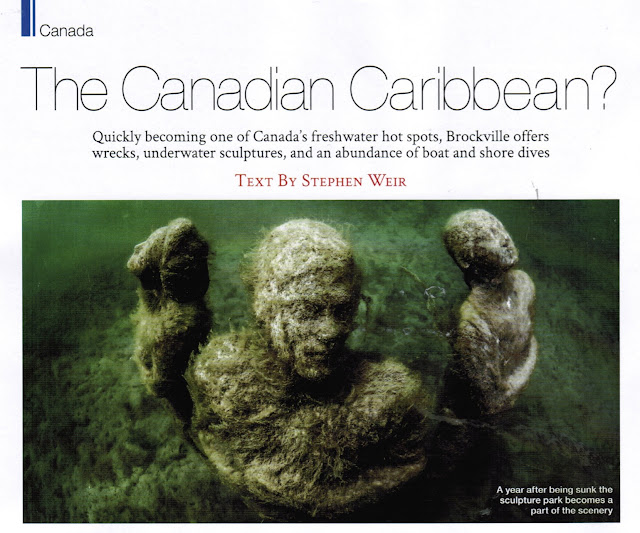 1,000 Island City Gets Number One Rating For Its River Diving By Stephen Weir (August Diver Magazine) First it was an American on-line dive magazine, then it was a chain of Canadian newspapers and now, Germany’s largest circulation magazine Der Spiegel is the city of Brockville, Ontario to discover why this is one of the world’s best freshwater diving destinations.   The St Lawrence River community has shipwrecks, shore diving, good visibility in warm water, a growing underwater sculpture park and just recently opened state-of-the art Aquatrarium   (both an aquarium and shipwreck attraction).   Diver Magazine layout - photo by Roy Letts ‘It’s not common knowledge, but Canada offers some of the best diving in the world, in some of the most untouched marine environments. So, what are the best dive sites in Canada? “ asks Scuba Diver Life, a California online dive magazine. “Brockville! Just across the St. Lawrence River from New York State, along a stretch of the r
1 comment
Read more
More posts