CTFF is back but this year on the little screen

Sit back. Relax. Turn On Your Smartphone.

By Stephen Weir Break out and bags of Orville Redenbacher's popcorn. You will need a shopping basket full to get through this year’s Caribbean Tales Film Festival  (CTFF) - and, oh gosh you are going to have to make it yourself.  The festival is going online this year, so all the movies will have to be enjoyed at home on computers, phones and pads.
Last night the CTFF held a digital media launch for the coming virtual film fest. They announced the names of nine feature films and hinted at a coming lineup of 25 short movies that will be part of the 15th annual CTFF.
CTFF runs from September 9th to October 2nd and will take place on the Video-On-Demand CaribbeanTales-TV (CT-TV) platform with livestream entertainment.  The film festival describes “CT-TV is an innovative subscription-based digital streaming platform that provides access to African and Caribbean-heritage films and TV programmes.”
Give that actor a work permit – Canada’s favourite Trinidadian Nickolai Salcedo was  a scheduled guest on last night’s media launch and talk-back session. The popular actor, singer and artist starred in the award winning 2018 Trinidad / Canadian film the Hero (which was aired last night as part of the launch) and he will be co-starring in a new T&T feature film that starts the festival in early September.
“The opening night’s theme of “The Trini In Me” kicks off CTFF on September 9th with a focus on Trinidadian filmmakers and the International Premiere of Grace & Saleem directed by Jian Hennings,” festival director Diana Webley, told the Camera.  “This is an unconventional love story of a socialite and devout Muslim is broken down into three significant chapters of their relationship.”

Grace & Saleem is a gentle movie that has been shown only once  - year at the Trinidad and Tobago film Festival where it won the People’s Choice Award for Best Feature.  It stars Nickolai Salcedo as the worried father of Grace, T&T actress and comedian Penelope Spencer (Play the Devil)  as Saleem’s mother, and Port of Spain poet Kyle Daniel Hernandez (Back to Freeport) and Shevonne Metevier  (Cutlass).
This made-in Trinidad film is getting its International premier at CTFF. Showing with Grace & Saleem will be two short films Regeneration (Dylan Quesnel) and A Mural by the Sea – a tribute screening of the work of veteran playwright, screenwriter, actor and director Tony Hall who passed away in April.
To help you the reader plan your fall movie watching schedule, the  Camera offers this thumbnail look at the feature movies showing at CTFF.
Sept. 16th Generation Lockdown is an American film by  New York City based Sirad Balducci.  This is short film seen through the eyes of Caleb, an eleven-year old boy as he tries to save his friend’s life during an active shooter attack in his school.  Her film is based on a short story by Caleb, a New Jersey 5th grader. 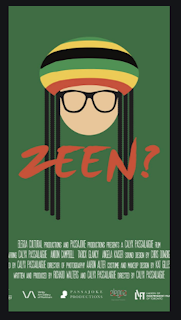 Sept. 17th      Zeen?  Is a Canadian comedy made  by Toronto’s Calyx Passailaigue.  He also stars in the film playing Chad a pretentious white Jamaica director. With his ragtag Caribbean cast and crew, he aims to shoot a highbrow social drama called "Brothers in Babylon."
“Zeen? is having its film festival premiere at CaribbeanTales,” Passailaigue told the Caribbean Camera. “However, it was created as part of the Tout-Monde: Markham exhibit at the Varley Art Gallery last year. We filmed Zeen? throughout Markham, Unionville and Toronto.”
Sept. 18th      Nefarious   Rhett Butler (yes that is his real name) has made Jamaica’s first horror gangsta flick. This 2018 feature film tells the story of Mark (Kevoy Williams) )who is  manipulated by his girlfriend's brother, to be led through a series of violent, horror filled scenes. In addition to the horrific flair. Butler (who studied at Humber College) says that he hopes this made in Jamaica movie will be the gateway to unleashing the “plethora of dark and wonderful stories” he has to tell.
Sept. 23rd  Queer Coolie-tudes
Director Michelle Mohabeer describes her 2019 Queer Coolie-tudes as a ground-breaking creative documentary which reclaims the slur of Coolie and visualizes the intergenerational lives, histories, identities, familial relations and sexualities of a diverse range of subjects from the Queer Indo-Caribbean diaspora in Canada.
Sept. 25th      But You’re Not Black (Danielle Ayow)
But Your’e Not Black is a documentary film based on the real life experiences of writer/director Danielle Ayow.  She is a Chinese-Caribbean-Canadian woman who, driven by people’s inability to separate her skin colour from her culture, tries to own the Trinidadian identity she knows should feel like hers.
Sept. 30th      Cu-Bop Across The Border

Japanese film maker Shin’ichi Takahashi travelled to New York and to Cuba to make a  full length documentary about musicians Cesar Lopez and Axel Tosca. One lives in New York, the other in Havana.  When the prodigal son returns to Cuba a monumental Jazz jam session takes place.  Cu-bop is a style of  jazz music born in New York City back in the early 50s in which Cuban rhythms are combined with bop. Film is in Spanish and English. .
Oct. 1st  Malpaso. Director Hector Valdez’s  2019 "Dirty gem" is about aBlack and albino twins who  have to fend for themselves in a violent and impoverished society unable to understand the pigmental condition, in this impressive Dominican movie.
Oct. 2nd       A People’s Art
Ayesha Casely-Hayford is a British/Ghanian actress and lawyer who lives in the UK. Best known for The Last Kill (2016), The Waiting Room (2014) and Spectrum London (2017) she is tho host and narrator in a personal journey to discover the history, meaning, and origins of Notting Hill Carnival. Director (Tony Oldham)
The Media Launch Livestream was hosted by award-winning author and storyteller Itah Sadu and included a special congratulatory message from CaribbeanTales Board Member Denise Herrera-Jackson and CaribbeanTales Incubator Alumni Nick Davis; a retrospect of CTFF’s history, and a screening of CTFF founder 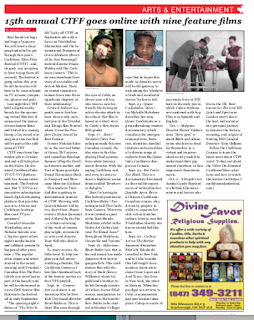