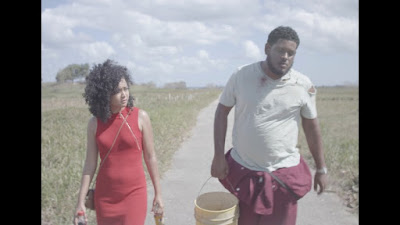 On The Road With Grace & Saleem

Director Jian Hennings found his actors on Facebook and then took them on a Trinidad road trip. Hennings, director and writer of Grace & Saleem, concedes that it is damn hard to make a “road movie” in Trinidad.
“It is a small island, you can drive around our little world in 3 or 4 hours.” Everyone has seen a road movie, from Thelma and Louise to Dumb and Dumber; the genre has been a cinema staple for over 60 years.
These are films where the main characters are
usually unknowingly on a journey of self-discovery. The destination is rarely as important as the experience of getting there.
Move over Hollywood. While most road movies are Made-in-America, Hennings has lensed this all in Trinidad making it the Caribbean’s first authentic On The Road movie. It is a good one.
Grace & Saleem is a love story of an unlikely couple told via three distinctive chapters of their relationship together. They have a soul changing road trip. Next is a five star dinner date which ends with the couple (who never do get their meal) eating a bag of doubles on a roadside wall.  And, it all ends with a fractured Christmas visit to their respective Muslim and Christian families.
Grace is an aimless black 20-something woman who opens the movie with a slam bam thank you mam encounter in the bathroom with a stranger at an all-night house party. Played by TV presenter and actress Shevonne Metevier, Grace leaves the party and then bullies Saleem (who is outside waiting for his sister) into driving her back to the city. Saleem,
a hulky, shy Moslem worker is a tour d’force performance for Trinidad actor / poet Kyle Daniel Hernandez.
It starts out badly when Saleem tells Grace “everything has an expiry date, even sluts (like you)”. Soon neither wants to be together in the clunky run-down truck, but over the course a long bumpy ride the two begin to understand each other and fall in love.
There is a Muslim prayer break in a harvested cane field. And then when the truck’s rad boils over, the pair walk to a roadside bar to get water where Saleem nearly gets into a brawl with strangers as he tries to protect her honour. The road trip lasts all afternoon and into evening as the pair drive up, over and around the island.
They fight. They flirt. They find the time to take in the beauty of their land.
“ You know I am one of the few people in Trinidad’s film industry who doesn’t live in Port of Spain,” said Hennings. “Every time I have a meeting I have to drive through the green countryside (from San Fernando). I want to show that beauty in this movie rather than the city, or the tar pits or our beaches”.
At the end of the road trip the pair are friends and they solidify their relationship, in chapter two with the first date at a fancy ass restaurant.
Saleem goes shirt and tie and Grace makes all the male diners’ tongues hang out when she enters the place dressed to the nines.
You have to see Kern Samuel. he portrays the funniest waiter ever filmed in a Caribbean movie. He literally has ta server’s magic touch: wine bottles, sparkling water, cutlery and menus appear out of thin air. He serves out dishes, food recommendations and love advice to a waiting and worried Saleem while simply setting the table.
The final chapter of the film is labelled “Christmas.” Funny yes, but it is also a comment on island racial attitudes.
The couple plan to spend part of Christmas in Grace’s Christian home and then dine in Saleem’s Muslim household.
By mistake, Saleem comes to Grace’s home solo and meets her inquisitive father, while she has travelled alone to Saleem’s where his mother and sisters maker her work for her meal.
You might have seen Nickolai Salcedo in the film Hero where he starred as the decorated World War Two veteran Ulric Cross. In Grace & Saleem, he is the worried father of Grace. Trinidadian actress and comedian Penelope Spencer (Play the Devil) is Saleem’s over-fussy and bossey mother.
“We look at race and religion, but in terms of being a Muslim, or being black, it is just one part of the characters’ lives we all live. I am Chinese but that doesn’t necessarily define all of me.”
Grace & Saleem was supposed to get its international debut and be the opening film of this year’s Caribbean Tales Film Festival. Hennings and many of the film’s stars were expected to be in Toronto to walk the red carpet.
That won’t happen in 2020 at least not live. There are no in-theatre showings  because of the COVID-19 shutdown. Instead, it  will all take place online.
“It is too bad, I haven’t been in Toronto since I finished school. (He went to York University).”
“ I miss the city. If I hadn’t come back to Trinidad, I would have probably gotten into film up there.”
The movie was made in just five months in the summer of 2019. There was such a mad dash to complete the movie in time for the Trinidad festival that he had to use some unique ways to get the job done (He actually got his actors and actress after posting a funny video on Facebook asking for help.) He is currently tightening up the film and working on the sound mix for the Toronto screening on September 9. 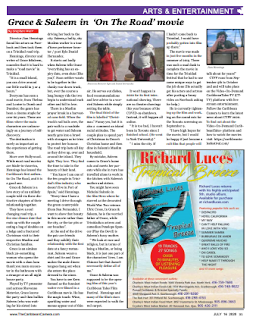 “I have high hopes for the movie, but I would be happy if just became a cult film that people will talk about for years!”
CTFF runs from September 9th to October 2nd and will take place on the Video-On-Demand CaribbeanTales-TV (CTTV) platform with live stream entertainment.
Follow the Caribbean Camera to learn the latest news about CTFF 2020. To find out about the Video-On-Demand CaribbeanTales- platform and how to watch the movies visit https://caribbeantalesfestival.com/