The Prime Minister. The Mayor. Community Leaders. All Came to Jane and Finch

Thursday’s Online Walk of Excellence for Jane and Finch.

Last Thursday, North Toronto students got the online surprise of their lives while watching a live YouTube broadcast of the annual graduation Walk of Excellence.  Not only did community leaders, entertainers and family members take part in the 2-hour social media broadcast, so too did the Prime Minister of Canada and the Mayor of Toronto!
In past years, Grade 12 students graduating from area high schools -- Emery, Downsview, Westview, CW Jeffreys and James Cardinal McGuigan have taken the Walk of Excellence from their schools to a grad party put on by York University.   In 2020, the year of the pandemic, the March was left to a small group of pan players while students from Kindergarten to Grade 12 took part on-line. 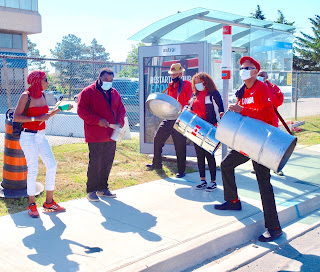 The broadcast was a mix of live footage from musicians performing on Finch Avenue West and Jane, to taped messages and live student posts.  It was carried on YouTube, Zoom, Snap Chat, and Facebook, with Walk organizer and owner of the A Different Book List – Itah Sadu - handling Master of Ceremony duties live in a Yorkgate Mall hub studio.
As the social media event was winding down Sadu announced that their mystery guest, a Mr. JT, wanted to speak to the students.  The broadcast cut to Ottawa where a bearded Prime Minister Trudeau stood outside in front of his official residence.
Speaking in both English and French and occasionally flipping his long black hair, Trudeau talked about Toronto’s Jane Finch community.
“Your community has always pulled up to show that they have your back,” said the Prime Minister.  “What once started as a walk from Jane and Finch to York University has now been repeated in Scarborough and in Ottawa. This is the strength of your community and that is special.”
“As you move on to the next phase of your life, take heart in knowing that you come from a community that will always stand by you. We know you have the leadership capability and the courage to make change happen,” he continued. “Recognize that today marks the realization of your dreams. Remember that nothing can take this moment away from you, not even a global pandemic.”

Strength. Family. Community. Those themes were used by many of the guest speakers, including the mayor, teachers, long time Jane Finch activist Winston, La Rose, and the staff of the Black Creek Community Health Centre.
CW Jeffreys’ principal Patrick Bernard Lee sat in his car and used his Smart phone to wish the students. He also used the opportunity to announce the winner of his school’s annual graduating bursary. In 2020 the bursary has been given to Ashika Scott, who has been accepted at Windsor University’s Social Work programme. “She has earned the respect of teachers and her parents,” said Principal Lee.
“This was our 7th year and there is no way that this lockdown was going to shut us down!” said walk organizer Itah Sadu. “ What we did was virtual with some physical elements.” 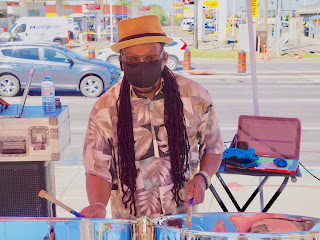 Some twenty pannists paraded and played along Finch Ave, Jane Street, Wilson, Keep and Shoreham Road. Working with the school associations, students cheered urged the pannists on both from their balconies and their computers.
The Caribbean Camera went down the road with a parade of five led by well-known musician and Calypsonian Pan Man Pat McNeilly. We walked from the Westview Centennial Secondary School on Oakdale Rd to the parking lot of the Jane Finch Mall.
Dodging construction vehicles (the sidewalks of Finch are being rebuilt), traffic cones, and fences, the performers played and waved at the bumper-to-bumper traffic crawling along Finch Avenue West.  Cheering motorists honked and yelled their support through open car windows.
At the mall the organizer had pitched tents and set up a staging area for the TV cameras and press photographers covering the event.   The CBC, both television and radio were out in full force, including radio announcer Kevin Carrington who is also he official Voice of the Toronto Caribbean Carnival! 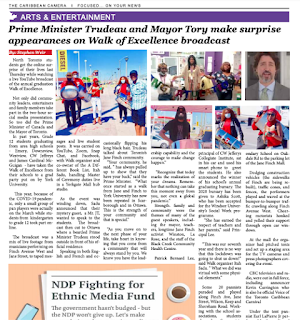 Under the tent Earl LaPierre Jr performed for the media and the Walk of Excellence broadcast audience.  It was fitting having LaPierre perform. His steel drum orchestra, AfroPan is not only the oldest band in the country; it also got its start near Westview High.
The complete on-line March of Excellence broadcast can be viewed on YouTube at https://youtu.be/Wivq-dg1uC8.