BUSY BEING CREATIVE IN HER DOWNTOWN TORONTO DIGS 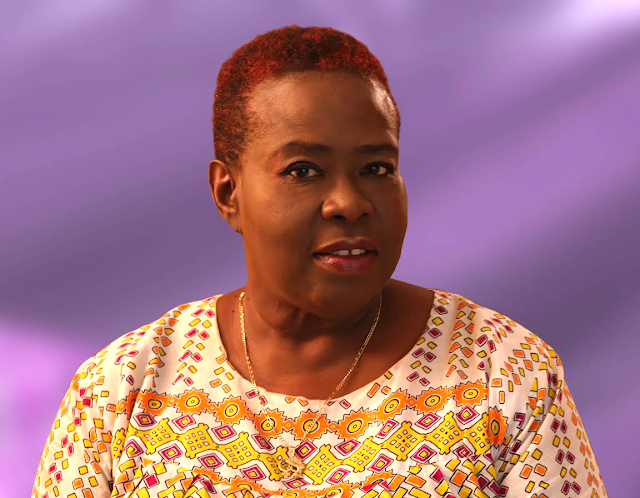 Rhoma Spencer is an actor, director, storyteller and broadcast journalist who began her career in her birth nation of Trinidad and Tobago. On stage, performing in TV shows, movies parts, and public events; heck, I have even seen her in costume at a high profile Scarborough funeral last year.
Up until the virus shutdown Spencer was one of the busiest live performance actresses in Toronto.  Over the weekend she did a Question / Answer with our reporter Stephen Weir.

Question 1: Where are you spending the quarantine? If you are alone, do you have ways of communicating with friends and family?
Answer 1: I spend it at home in downtown Toronto with two other family members in my three bedroom townhouse.

Question 2: As an actress and entertainer and performer, you seem to be always involved in very cool projects. What was 2020 shaping up to be for you before the shutdown?
Answer 2: The year started off with a bang in January with Solitudes put on by ALUNA Theatre (a play staged at Harbourfront), then February and March in Trinidad with two comedy shows and a stint with my former colleagues in broadcasting, doing the commentary for the Extempo Calypso Monarch competition and the National Calypso Monarch Competition. I had to return to Canada in March, (that was to be) my time for confirming and signing contracts for the summer season … enters Corona from Stage Left.

Questions 3: Have you been able to use this enforced downtime to be creative and if so what might appear when you emerge from Perdue?
Answer 3: Yes I have. I had a writing project called the Covid Confessions with Convergence Theatre. One of 88 artists chosen to write a script based on confessions sound bytes sent in by the public to the Theatre’s hotline or via email. Right after this came a writing residency with ALUNA Theatre that would showcase in September and a project called Queer Pride in Place by Buddies in Bad Times Theatre which will perform on Pride weekend in my community.

Question 4: What does the future hold for you - will you be back on the boards here in Toronto or are you planning to go back to T&T? Will you be back with the Caribbean Festival’s virtual broadcast? Any other gigs in the works?
Answer 4: Like the rest of my artistic colleagues in Toronto and Trinidad we are in a state of limbo. So it’s a wait and see situation. All our live performance projects have been cancelled including my summer gig, the Pan Alive Competition which I have done for the last four years. However, the creative process hasn’t stopped so it’s just a matter of time when one can have a live audience view your work.

Question 5: What are your thoughts on the pandemic and how it is changing the world? Do you see theatre and performance art changing? Will the Arts world return to the way it was, or what do you think the new normal will be in terms of the music and how people react to it?
Answer 5: The present pandemic no doubt will inspire the Art you create. I have already begun with Home Wreck for Convergence Theatre and mY Physical Theatre Project, Queerantine which debuts on a downtown sidewalk in Toronto on Pride weekend.
The Pandemic has already showed how the arts and cultural worker 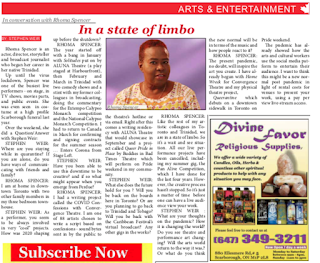 uses the social media Platform to entertain their audience. I want to think this might be a new normal post pandemic in light of rental costs for venues to present your work using a pay per view live-stream access.
actress Caribbean Camera Pandemic strategy Q&A rhoma spencer Stephen Weir storyteller trinidad and tobago