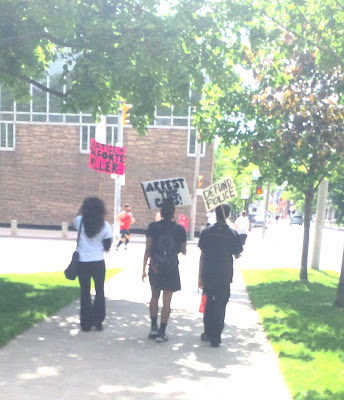 I was probably one of the oldest people taking part in Saturday’s Queen’s Park march and demonstration. Everyone was so polite, even one of the giant police horses that were hidden away north of the Parliament Building showed some difference as I walked by.
On a sunny warm Saturday afternoon thousands of people marched from Trinity Bellwoods Park in the west end of the city to Queens Park to protest anti-black racism and police brutality. And that was just one of two marchers in Toronto another parade started at Nathan Phillips Square and ended at the Yonge-Dundas Square for two hours of speeches, sign waving and chanting. 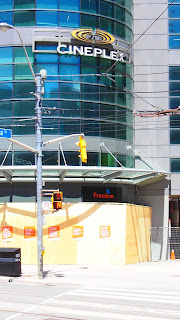 Both events went on without a hitch. There was no violence, and the only arrest that the Caribbean Camera heard about was at City Hall where a white man showed up in black face. Protestors suggested that the police did the man a favour by taking him away in handcuffs!

At the Queen’s Park rally the crowd was equally between black and white young people. Many carrying messages, signs and placards that spoke to many racial issues facing the GTA today. “ Defund the Police “, “Investigate the SIU”,” Police Brutality”, “and Reform Peel School Board” and of course sings mourning the death of George Floyd were waved at the police and the full court of attending press.
Earlier in the week shop owners and businesses had been warned to expect rioting and looting on Saturday. Rumours on the Internet that bricks (meant for throwing) had been placed along the parade route by radical organizers. Turns out to be false, it didn’t happen – but business owners took no chances and boarded up most of the windows and doors on the march routes. 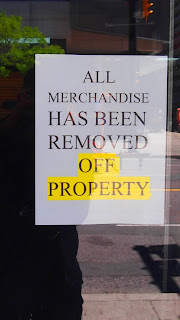 The marches were friendly and downright festive on Saturday at the Queens park event the Caribbean Camera covered. Protestors took breaks from chanting slogans to lie on the grass under the trees in Park. There was a large police presence to be sure, but on the frontline the officers were in summer gear – short pants and bicycles. None wore masks and outside the US consulate some police actually took part in symbolic “taking a knee” ceremony.
Even though the march was laid-back, the seriousness of the message did resonate with motorists who drove down University Avenue honking their horns in support of the protestors. Pedestrian by the hundreds shouted encouragement too!
On Sunday morning the Caribbean Camera went back to Dundas Square to see if there were signs of damage to businesses and shops. The windows and doors at the 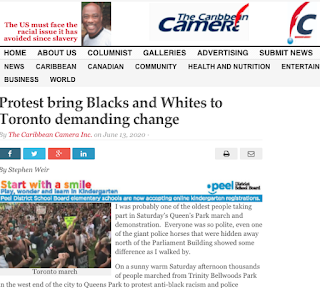 Eaton Centre and many other buildings were still boarded up. There was no damage, no garbage, no painted and no sign that thousands had been there just 12 hours before, demanding change!