Kevin and Raesha signed on for hosting duties

June 15, 2020
Kevin and Raesha signed on for hosting duties
Information is scant right now but get ready for a media dump from the FMC about the Digital 2020 Toronto Caribbean Carnival 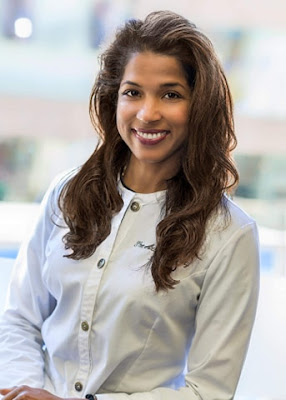 Raesha Sirois
By Stephen Weir When it comes to the upcoming Virtual Toronto Caribbean Carnival MUMs is the word as far as detailed information about the event is concerned.  However the Caribbean Camera has heard through the grapevine that a deluge of information the 2020 Digital Carnival is soon to be released by the organizers of this unique online July event.
We do know that the Toronto Caribbean Carnival 2020 is getting ready to digitally jump up beginning July 3rd with an official City Hall Proclamation of Toronto Caribbean Carnival Month. Over the next four weeks there will be programming of Steelpan music, live Calypso performances, a virtual King and Queen competition, a Junior Parade and the Grand Parade itself.
“For several nights in July there will be performances using footage from past years, borrowed footage from stakeholders and new pan and calypso performances, including some big name surprises,” Aneesa Oumarally, CEO of the Festival Management Committee (FMC) previously told the Caribbean Camera.
Earlier this week Reggae instructor and currently a CBC radio announcer, Kevin Carrington (aka The Voice) posted on Facebook that he will be the host of the online carnival. 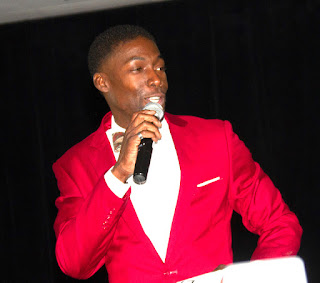 Left: Kevin Carrington
“Like many of us I am eagerly anticipating what this year's virtual presentation of @torontocarnival.ca will look like in these uncertain times,” wrote Carrington “I am happy to announce that I will be back as the official VOICE of the Festival ... from the Lakeshore to your living room!”
Sharing the hosting duties with Carrington will be popular pannist and Mas model Raesha Sirois.  For many summers she has been one of the on-air hosts on CP24s coverage of the annual parade with Nathan Downer and Patricia Jaggernauth.
Every aspect of the digital 2020 carnival will be streamed online, using the FMC’s website www.torontocarnival.ca/, Facebook account, Instagram page and Zoom. As of yesterday there was no information on the FMC website, but, interested carnival watchers should keep an eye 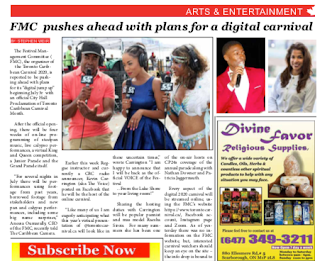 on the site – somethings have been posted on Facebook and it is a given that the full info drop is coming soon!
Caribbean Camera digital carnival festival management committee Kevin Carrington MC online carnival Ontario The Voice Toronto