This Guy Knows The Science Of The Carnival Arts 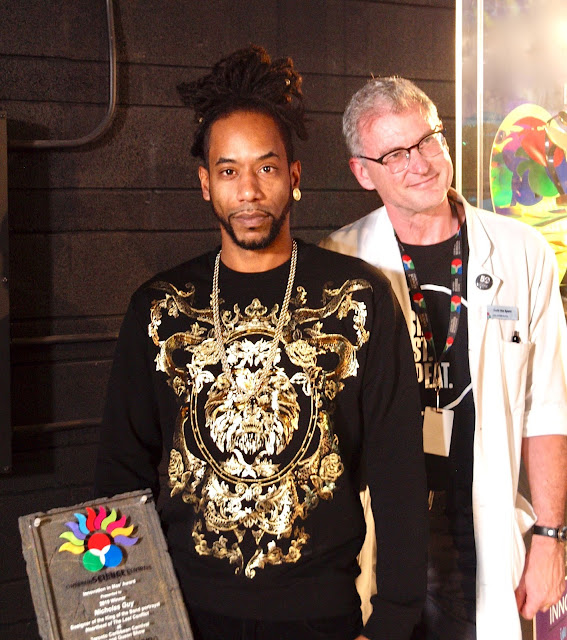 King Costume Designer at the Ontario Science Centre to Pick Up His Award
Summertime memories of the Toronto Caribbean Carnival Parade may have begun to fade, but for fans of the Caribbean Arts. one memory will never disappear.  Who can forget Heart Beat of the Thrill of Life, the incredible King Costume worn by first time designer Nicholas Guy at the August King and Queen Competition.
It was a two-sided costume that depicted the final battle of angels and demons, where good triumphs over evil.  Guy’s costume won it all that night including the coveted annual Ontario Science Centre Innovation in Mas’ Award. He won both awards on behalf of the Louis Saldenah’s Mas K Camp.
On Sunday afternoon at a packed Ontario Science Centre, Nicholas Guy was honoured on stage for the construction of that breathtaking costume.  Guy spoke at length at the ceremony about the costume and the relevance of the Carnival dream! In the audience were members of the Mas K Club, friends and his parents.

“As a first-time designer, Nicholas Guy’s design particularly stood out to the (Ontario Science) jury for its risk-taking in materials and mechanics,” said the Centre’s director Kevin Von Appen. ‘ Guy’s collaborative approach to addressing and resolving challenges, allowed him and the Louis Saldenah Mas K Club to achieve their joint vision.”

“ Mr. Guy’s costumes shows that you don’t have to wear a white coat to make good science!” he said while presenting the designer his winning plaque.


The prize was established in 2010 to recognize innovative carnival costume design. The Award honours the designer, whose creation best demonstrates the principles and practices of engineering innovation, including risk-taking, problem solving and collaboration. The judging criteria also consider the creative use of materials and a commitment to the advancement of this unique craft 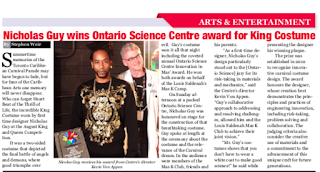