Edmund Bartlett, A day late and a dollar short 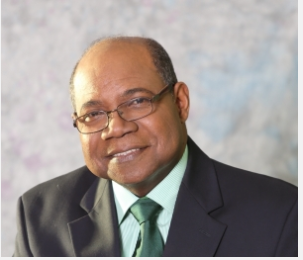 It wasn’t a good sign. An hour late, no one was at the Jamaica Canadian Association Hall microphone and reporters waiting to meet Jamaica’s Tourism Minister, Edmund Bartlett, received another round of free drinks.
A few minutes later, members of the minister’s advance team took to the podium to say that the Minister was tied up at the Pearson airport and was expected to speak at 8pm – an hour and half after he was suppose to.
It was a planned reception that Bartlett had invited prominent Canadian Jamaicans, travel experts and the media to attend in North Toronto.  He wanted to brief Canada on the bullish state of tourism in Jamaica.
When the Reception finally started it was announced that the Minister would not be appearing and apparently he never had intended to show up at all! A video made the day before was played to the audience of 100, in which the Minister apologized for not coming to Canada this evening apparently because of government commitments in Kingston.
Second in command, Donovan White, the director of tourism for the Jamaica Tourist Board, filled in for the missing minister.  Although the news was good. It was a strangely muted talk that drifted from announcing new hotels and new airline partners to talking about what a dangerous world we all live in!
Quoting from his boss’s note, White told the audience that they were just in the UK when Thomas Cook Travel went bankrupt.  The island, which faced a potential loss of 1 billion dollars in travel business, was able to recover all the lost seats.

“Jamaica became the first country to conclude fully, all the arrangements to recover the loss airlift occasioned by the collapse of Thomas Cook,” reported White to a clapping audience.

Other good news? Canada continues to be the third largest supplier of tourists to Jamaica, approximately 400,000 people in 2018.  So far this year there has been an 8.6% growth in the number of Canadians visiting the island.
Building was the key word of White’s talk. New hotels are being built. Old hotels are being rebuilt, refurbished and expanded (1,000 new rooms in 2019). New roads are under construction. The Montego Bay Airport is being expanded and a new cruise ship dock in Port Antonio will soon open.
“Jamaica is experiencing record-breaking numbers, undergoing major developments, and receiving global recognition like never before,” said Donovan White. “Tourism is our largest source of foreign exchange and our second largest employer!”
Jamaica is a global destination. In the near future tourists from Canada will find themselves sharing the beach with travellers from Russian and South America.  Donovan White told the audience that the South America’s largest airline – Chile’s LATAM air – will soon be flying three times a week into Jamaica.
Russia is back this fall flying larger planes than it did in its inaugural season last year.  And the Jamaican government is currently in talks with Japan to attract new tourism business as well!
When those new international tourists arrive they can stay in new hotels launched by European, American and Mexican companies! 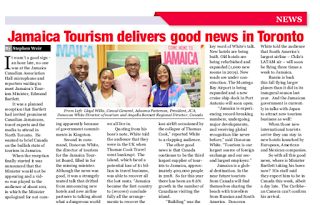 So with all this good news, where is Minister Bartlett taking his bows now?  Although he missed the first leg of his Canadian trip he did make it Toronto a day later to meet with Canada's Sun Wings airline  this week, albeit a day late.