FINAL TOUCHES MADE ON THE MANDELA WALL

By Stephen Weir: Dusting. Straightening.  Turning on the museum lights. The final touches on the exhibition MANDELA are being made in preparation for today's official opening!
The doors will open to the public after lunch for MANDELA, a blockbuster-touring exhibition created by the Canadian Museum for Human Rights in Winnipeg. It is all happening in North Toronto at the Meridian Arts Centre 5040 Yonge St, the show runs till January 5th 2020.
For show goers, a wall of battered “whites only” signs is the first thing you see as you enter the exhibition. Be prepared for what is described as a  “rich sensory experience of imagery, soundscape, digital media and objects!”
This multi-media exhibition has been created in collaboration with the South Africa’s Apartheid Museum. MANDELA explores Nelson Mandela’s fight for justice and human dignity in South Africa.
What is there to see? Pictures. Sounds. Images. And, original artefacts including a battered ballot box used in the country's first democratic elections in 1994 when Mandela became president, There is a letter in Mandela's own hand, sent from prison to a union leader involved in anti-apartheid mobilization and a notepad Mandela used during negotiations for democracy, There is also a message Mandela wrote in the Canadian Senate during a visit shortly after his release from prison in 1990.
Visitors will experience Robben Island Prison, a former leper colony and animal-quarantine station off Cape Town, Nelson Mandela – Prisoner 466/64 – was kept by South Africa’s white-supremacist regime for eighteen years.
“ To me the most critical part of the exhibition is a life sized replica of Mandela’s eight-foot by seven-foot prison cell.  It is enlightening to see it and think about Mandela and his 10,000 days of incarceration,” Clyde Wagner, the president and CEO of TO Live said.
MANDELA, the exhibition has been installed over two floors at the Gallery inside the Meridian Arts Centre.  There is a $10 admission charge to tour the 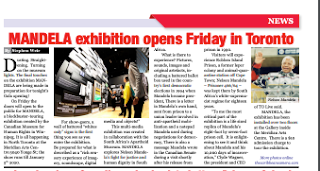