Toronto fervently wishes that the name Lester Donaldson would not be spoken and that 29 years after his death the city could return to being known as Toronto The Good.   But if wishes were kittens, Amanda Parris’s debut play, Other Side Of The Game, would still be a lion’s roar against Toronto’s treatment of the Black community – from police shootings in the last century to carding in the 2000s.
Lester Donaldson is a name from way back.  He was a mentally disturbed Black man who was shot dead by police in a Toronto rooming house.  It was 1988 and the community rose up and marched, shouting Lester’s name at the police and City Hall.
It was the spark that lit a roman candle under Dudley Laws who shortly thereafter formed the Black Action Defense Committee (BADC). There were more shootings of innocent Black men and BADC hit back with more  and larger demonstrations and finally a riot.
In Other Side Of The Game, a BADC-like group is planning to demonstrate because of the police.  The name Lester is used by Akilah (Virgilia Griffith), as a rallying call to her radical political group and as a metaphor for her struggle as a single parent trying to raise a young son.
Angry is good in the context of this play. There are only a few days left to see this kickass  90-minute performance  at the Aki Studio Theatre in downtown Toronto (Regent Park). Presented by Cahoots and Obsidian Theatres, Other Side Of The Game closes November 5.
Set before the rise of Black Lives Matter, Other Side Of The Game time slips from the 70s and 80s to just about now. Parris weaves a story of gagged Black women who have to do the real work of community politics, while bailing out the men, raising fatherless children and following a ride-or-die code. At the same time the story flicks forward to contemporary times to give voice to Black women who support their men, even when their partners have made the wrong choices.
There are five actors non-stop on the minimalist flat floor stage –Virgilia Griffith, Shakura Dickson, Ryan Rosery, Peter Bailey, and Ordena Stephens-Thompson. All play dual roles, move furniture and keep the energy levels high. The play is evocative and lyrical in its presentation of the Black community under siege.
This is action drama with the principal actors running from the police, hiding from neighbourhood gangstas and marching for all that is right. And, there is time to talk about the politics of Black resistance in the context of women’s rights, parenting and love.
We meet Beverley (Shakura Dickson), a homeless Nova Scotia student, who joins the movement only to learn that it is controlled by a pair of misogynist men – young Khalil (Ryan Rosery) and “Elder”(Peter Bailey).   While the men rooster fight for ownership of a coming demonstration, the actual work is handled by Akilah (Virgilia Griffith), who plans the parade, writes the press releases and bails the men out of jail while struggling, as a single mom to raise her young son.
The second plot, which unfolds in alternating scenes, zeroes in on Nicole (Griffith), a single mom working at Shoppers Drug Mart but with big plans to become a psychologist. She has it all under control until her ex, Devonte (Rosery), shows up fresh out of jail. She wants him back in her life but is unable to deal with his return to a life of crime, his new gangsta persona, and misogyny.

Playwright Amanda Parris was born in London, England, descending from Grenadian and Venezuelan ancestry, and was raised on the south side of Jane Street in Toronto. She is best known for her work in the media as the host of CBC TV’s Exhibitionists and CBC Radio 2’s Marvin’s Room.

The play is directed by Nigel Shawn Williams and is co-presented by Cahoots and Obsidian Theatres. Toronto-based Cahoots Theatre focuses on intercultural encounters, the intersection of identities and the innovation of form. Obsidian, also based in Toronto, is Canada’s leading culturally specific theatre company. It is passionately dedicated to the exploration, development, and production of the Black voice. 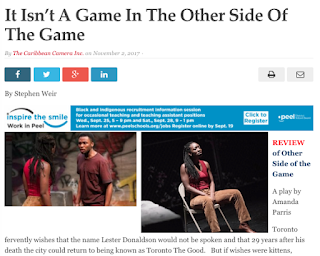