Toronto's only Black station. New owner is not Black.

No Black Owners To Groove On Toronto’s FM Airwaves 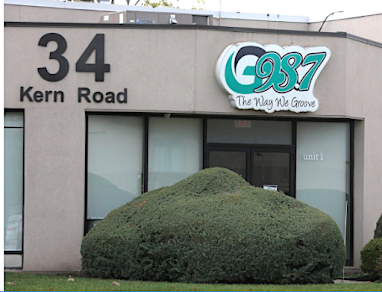 By Stephen Weir: There used to be two, but now there are none.  Despite written pleas from the Prime Minister, the mayor, community groups and a listeners’ petition, the financially stressed radio station G-98.7 is no longer in Black hands.

On Monday morning a court spent just an hour reviewing the purchase offer of the last Black owned station in the country (Flow, Canada’s first Black FM station was sold off years ago). Pending a licence review by the Canadian Radio and Television Commission, Mississauga broadcaster Neeti P. Ray is now the proud owner of a station that bills itself as one “that Grooves.”

Ray already owns and operates multi-cultural stations CINA-FM in Windsor and CINA 1650 AM in Mississauga. The two stations air programming in a variety of language including: Assyrian, Cantonese, Hindi, Serbian, Spanish and Ukrainian. According to Wikipedia 80% of their daily programming is in Arabic.

“While I prepare to undertake the task of bringing the much needed stability to G98.7, the long term mission remains the same as envisioned in its original CRTC application,” Neeti Ray told me earlier this week. “It is to serve the Caribbean, African and Black communities of the GTA.”

“ As the licensee of G98.7 (CKFG) and custodian of the FM frequency, my responsibility, first and foremost, is to adhere to and fulfil G98.7's Conditions of Licence.” 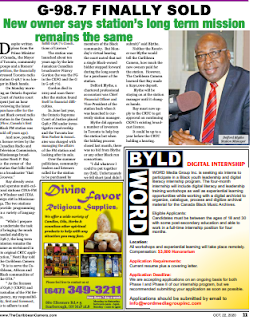 The station was founded almost a decade ago by the late Jamaican Canadian broadcaster Fitzroy Gordon (he was the FG in the G-98.7’s call letters CKFG).  Gordon passed away in 2019 and soon thereafter the station’s finances unraveled. Debt, lawsuits, falling listenership, internal discord and a downturn in advertising drove the station to the brink of bankruptcy.

In June the Ontario Supreme Court of Justice placed G98.7 FM under investigative receivership and the Toronto law firm Farber & Associates was charged with managing the affairs of the FM station and quarterbacking its sale.

Over the summer politicians, community leaders and listeners called for the station to be purchased by a Black bidder.  But it was not to be.  At Monday’s virtual hearing the court noted that not a single Black-owned bidder stepped forward during the long search for a purchaser of the financially troubled station.

Delford Blythe
Delford Blythe, a chartered professional accountant was Chief Financial Officer and Vice-President of the station back when it was launched.  A few years in  he and his former friend Gordon  parted ways. Blythe was brought back after Gordon’s death and is currently running the station almost single handedly.
He was expected to put in an offer for the station he helped start. Blythe did approach a number of investors in Toronto to help buy the station, but when the bidding process closed last month, there was no bid from Blythe or any other Black run consortium.
“ I did whatever I could to put together my (bid). Unfortunately we fell short (and I didn’t submit)” said Blythe. “There were different factors going on. The best bid won, but there were only two bids. That was all the Receiver had to look at.
“In line with the Court's directions, the purchase price is confidential at this time,” said the new owner. We do know that Ray has already put down a $250,000 deposit.
Assuming that the price is in the million-dollar range, Intercity Broadcasting Network, Fitzroy Gordon’s ownership company (now controlled by his family), has considerable debt on its books, much of it owed to the Canada Revenue Agency.
While IBN’s financial woes don’t impact the new ownership, there are other issues that need to be addressed quickly.  Falling audience numbers, a lack of advertising, a dispute with the CBC over their Peterborough transmitter and expensive studios in North Toronto has the station bleeding money.
The CBC transmitter in Peterborough impacts the station because G-98.7 must adjust its own signal to not interfere with their signal. G’s transmitter on a tall building in downtown Toronto sends out a strong signal to the west of the city, however, in Scarborough it is often impossible to hear!

Neeti Ray is aware of the many challenges he faces, including dealing with the CBC over transmitter issues.

" There would be more pressing issues to deal with first, like operational stability. Intercity Broadcasting Network is dealing with its legal issues," said Ray. "As for the new ownership, it would be a new entity and a fresh start."

Now that the courts have ruled in favour of Mr. Ray's bid, the station must apply to the CRTC to have them review the deal and continue the existing broadcast licence, or issue a new licence.

It could be a year before the CRTC holds the hearing. Blythe has been asked by the new owner to stay on and continue to run the station.