Marcia Ien gets Social with the voters of Toronto Centre.

October 09, 2020
Marci Ien is getting social with voters in Cabbagetown, Rosedale, The Gay Village and Regent Park 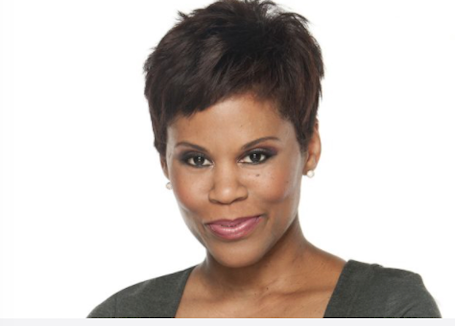 Marci Ien has left the world of TV and if the voters in Toronto Central agree, is on her way to starring in the Big Show.  Caribbean Canadian journalist, TV personality and soon-to-be author is the Liberal candidate for a Federal By-election that is being held on October 26 in downtown Toronto.

Ien has been a fixture on morning television in Canada for almost 30-years. The Ryerson graduate has been an anchor on CTV’s Canada AM and for the past five years as a panelist on the midmorning talk show The Social.

She has taken a leave from the show to run for the seat recently vacated by embattered Liberal Finance Minister Bill Morneau. Although Toronto South is considered one of the safest Liberal seats in the country, rookie candidate Ien is up against nine other candidates from both established and fringe parties.  Of note is that newly minted Green Party leader, Caribbean Canadian lawyer Annamie Paul, who is also running for a seat in the densely populated  downtown riding. 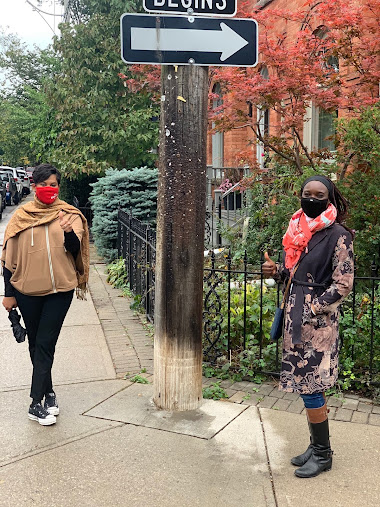 Ien, a single mother, lives just north of the riding with her two school-aged children Blaize and Dash.  She has no plans to move back into Toronto South at least not until after her kids are finished school.

Rich. Poor. Gay. Funky. The neighbourhoods of Bay Street, Ryerson U, The Gay Village, Regent Park, Cabbagetown and Rosedale, all are part of the Toronto South Riding.  Her parents - well known educator Joel Ien and accountant Vilna Ien - immigrated to Canada in the 60s and settled on Ontario Street in the Toronto South riding.

“ Sixty years ago this was the place that they landed in. I was born right here,”Ien told the paper yesterday. “ Canadian yes, but, I had a Trini upbringing.  What is happening in the Caribbean has not been lost on me.”

“ Relations between Canada and the Caribbean is different since my parents came here,” she continued. “ So, I want to look at the issues (immigration, visas, trade and aid) and bring that with me to Ottawa.”

The 51-year old cites the Black Lives Matter movement as one of the major reasons she has stepped away from her high profile TV show to make a rookie run at politics.

She says she is used to change. “ Five years ago, when The Social was launched, it was suddenly a different realm for me.  With the Social it isn’t about (story) neutrality, it is about opinion and lifestyle.  After George Floyd we were able to put together specials talking how all of us can stand in solidarity as allies of marginalized communities, including Black Canadians.” 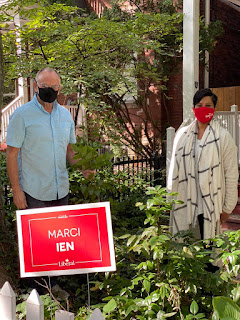 “ I talk about being the mother of a Black boy. I  talk about Black Lives Matter (and my own experiences). I want people  to understand.  I continue talk about my  own police stop incident and I have even talked about my 80-year old dad being stopped by police too!"

“There are many wonderful police out there - but this has been going on a long time.  I believe we must take action, through government and leadership, (to bring change). Of course I am  going to talk about it because I can.”

In any other time, Marci Ien and her army of volunteers would be out in the streets waving at commuters, shaking hands, kissing babies and talking politics.  Not now.

During these Covid times, Ien is working the phones and attending as many small community meetings as she can. As well, thanks to her huge public profile, she has a large following online.  She estimates that she has over 80,000 friends and followers watching and interacting with her on Instagram, Facebook and other Social Media platforms. 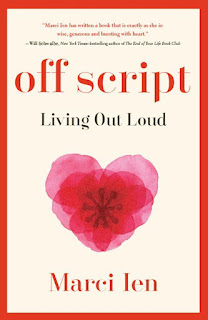 Although most of her social media postings these days have a political bent, now and then Ien does mention Off-Script her soon-to-be published diary-style book.  The book might need a new chapter stuffed on the day it hits the streets. Publisher HarperCollins Canada is dropping the autobiography on October 27th the day after the by-election! 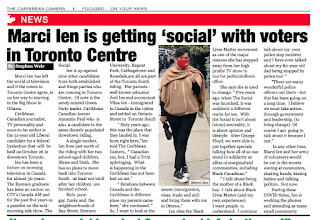