Malpaso Is A Five-Hanky Movie

As the 15th annual Caribbean Tales Film Festival (CTFF) “reels” towards its Saturday night conclusion we have noticed a sub theme running through three of the keynote movies that are showcased this fall.  This trio of principal films is all about identity – be it race, colour or sexual orientation.

Writing in the Caribbean Camera I have reviewed two of those movies in past issues of the paper; But You’re Not Black and Queer Coolie-tudes.   Yesterday the paper screened the disturbing third movie, Malpaso, made by Hector Valdez, a Dominican Republic moviemaker who did his schooling in Montreal at McGill University.

But You’re Not Black is a quirky 30-minute documentary made by Toronto comedian and filmmaker Danielle Ayow. She is a Chinese-Caribbean-Canadian woman who, driven by people’s inability to separate her skin colour from her culture, tries to own the Trinidadian identity she knows should feel like hers.

Queer Coolie-tudes by another Trini-Canadian, Michelle Mohabeer, is also a film about issues of Caribbean LGBT identity. She describes her 2019 Queer Coolie-tudes as a ground breaking creative documentary.  Shot here in Toronto Mohabeer examines her own sexuality and that of other “Queer” Indo-Caribbean people.

Mohabeer tracks the intergenerational lives, histories, identities, familial relations and sexualities of a diverse range of subjects from the Queer Indo-Caribbean diaspora in Canada. Like But You’re Not Black, the Trinidadian Canadians in this movie try to grapple with how they are seen by the community because they don’t fit the perceived norm. 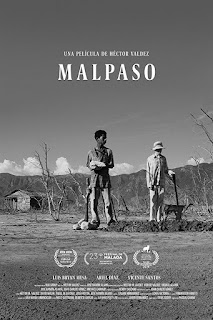 The third movie, Malpaso is a tear worthy bleak story that is sad sad sad from beginning to end. It is a feature length film about twins growing up in a hellhole of a Dominican border town – Malpaso. It is on the Dominican side of the Haitian border but it could be the third level of Dante’s Inferno.

Malpaso looks like it was built in hell. Machete and gun totting children terrorize the community like Lord of the Flies feral warriors.

The twins, played by Ariel Díaz and Luis Bryan Mesa star in this black and white film. And like the medium of the movie itself the first boy is an albino and the second as a self identified mulatto.  From opening credits to the movie fading to black, they are terrorized by their grandfather, the children of the village and the gun totting adult Mafioso who decides who lives and who dies.

As the film opens Braulio works the desert farmland with his hateful grandfather while his twin, Cándido remains inside their shack hiding from view due to his albinism. When the granddad passes and the farm burns down, Braulio takes Cándido to town where he promises to keep him safe despite knowing that Malpaso is no place for orphans.

The street gang wants to kill both boys, Cándido, because he is ghost white and Braulio because he is effeminate. The gang’s adult crime lord keeps them in his whorehouse and soon begins to mold them into becoming murderous gang members. 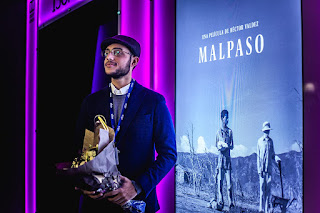 Braulio can’t keep his promise to his brother and soon lands himself in jail. And Cándido? Without his brother protection, he submits to being sold into slavery as a sexual oddity.

Could it get worse? Take it from us it doesn’t end well.

Director Valdez (pictured right) says it a story about orphanhood based on the line that separates the Dominican Republic from Haiti, a zone that always had him "sensitized "by the contrast of the border and by the" symbiosis "of both sides to survive.

"Cándido is a Caribbean Oliver Twist," Valdez is quoted as saying, "the problem of day and night, the contrast between the Afro-Caribbean phenotype and the life perspective of a character that needs a protector, in this case, his brother."

This is a film that is tough to watch and impossible to forget, Gritty. Dirty. You can almost hear the flies buzzing and the rats scurrying.

The annual film festival started two weeks and runs until October 2nd. Because of the Covid shutdown the latest Caribbean films are showing online on the Video-On-Demand CaribbeanTales-TV platform with eight nights and 25+ short and feature films of live stream entertainment.