NIA Centre for the Arts - Sunny Ways for Sunny Days Ahead. 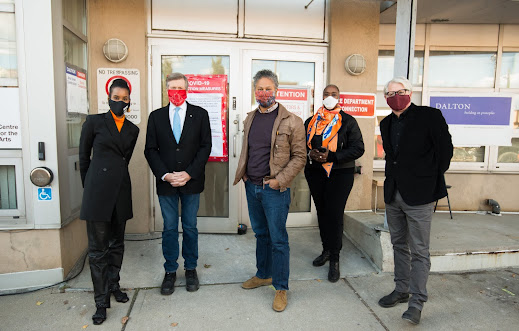 (L to R): Alica Hall, Mayor Tory, Nation Cheong, MPP Andrew and MP Vaughan in front of the Nia Centre For The Arts

A Little Jamaica Project With a Purpose

As autumn days go last Friday’s press conference for the NIA Centre for the Arts was perfect.  Warm temperatures, no wind and sunshine beamed down on a Little Jamaica building that is about to make Black history in Canada.

The afternoon media event had speakers and representation from the province, the city and arts group both in person and online.  Prime Minister Justin Trudeau helped kick off the half hour event with an online speech in both French and English (I attended virtually as well).

The PM spoke from Ottawa

Speaking from Ottawa the PM said “This new space will continue to bring people together and allow everyone to experience the art that is rooted in Black Canadian traditions, and that is incredibly important because we all need to continue to educate ourselves on the culture and experiences of others.”

The city owned building is located on Oakwood Avenue just south of Eglinton West.  Now the home of the NIA Centre, at one time it was an entertainment palace, according to Mayor John Tory who spoke at the presser.

“ I am happy the city was to provide this building, it was a building that has a very storied history as a bowling alley and as a banquet hall. Now it is going to be the first professional Black arts centre of its kind in Canada!”

NIA, (it is Swahili for purpose), has been in the structure since 2015.  The Little Jamaica based not-for-profit organization supports, showcases and promotes the arts from across the African diaspora. It offers programs in music, photography, literature, visual arts, theatre and interdisciplinary arts.

The Project has received $2-million in grant money from the Federal Government along with financial assistance from the City of Toronto, Canadian Heritage, United Way Toronto and the Trillium Foundation. Construction has already begun on the $6-million project, it is expected that it will be reborn into a modern professional arts centre by October of next year.

When completed it will be a hub to provide the community with art exhibition spaces, a 150-seat performance theatre, co-working spaces, digital arts incubation studios, recording and visual arts studios and community workspaces.

Standing in front of the building the NIA Centre for the Arts on Friday CEO Alica Hall told the audience that “since we were established our mission, it has always been to support, promote and showcase art from the Afro diaspora.”

“We recognize that despite Black artists being celebrated around the Globe there isn’t a professional facility in the city where we can present their work. The NIA Centre isn’t just a building; we are creating a destination for Black Canadians. Finally we will have a place to celebrate our stories and validate our challenges and celebrate our successes.”

Speakers including MP Adam Vaughan, councilor Josh Matlock and community leader Nation Cheong, spoke about what the new centre will mean to the community.  There are concerns that the area is in a state of decline because of the extended construction of the nearby Eglinton Metrolinx high-speed transit line.

“I want to say to Little Jamaica and the Black led business community (including the NIA Centre) that these businesses and the whole destination that is Little Jamaica will thrive rather than just hang on by fingernails,” explained the Mayor. “This is going to be the first professional Black arts centre of its kind in Canada I am proud that it is here in this building that the City has provided.”

In addition to supplying the 14,000 sq. ft. facility, the City is also assisting with the just started renovations.  The Charitable organization has already raised $250,000 – it has set a fund raising goal of $1,500,000.