Leaving the Hoi Polio behind.

September 29, 2020
Ian Williams reaches the Stars with his Poems and Books By Stephen Weir 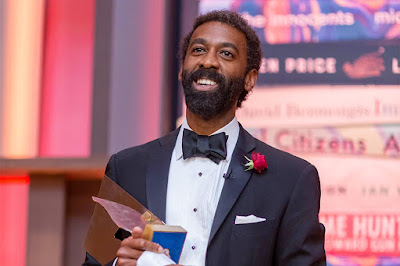 One day earlier this month Trinidadian Canadian writer Ian Williams passed over from being a rising talent to that of an honest to goodness literary star.  In September the award winning poet and author was made a spokesman for Canada’s richest fiction prize, was featured in an exclusive magazine for the country’s well-heeled and oversaw the publishing of his new book of poems. Williams was born in Trinidad in 1979 and moved to Brampton with his family when he was 9.   He earned his PHD at the University of Toronto and is currently a professor of poetry at the University of British Columbia. Last year his first novel, Reproduction won the $100,000 Giller Prize and was shortlisted for two other significant Canadian book prizes. Williams’s poetry books have been shortlisted and won many Canadian Literary Prizes!  Word Problems, his latest book is a mash-up of poetry and prose and is currently being printed in downtown Toronto at the venerable Coach House Press.  It is located on a back alley behind what used to be the Rochdale College; it specializes in limited edition prestigious hand-printed poetry books. The Caribbean Camera visited Coach House Press and received a just bound copy of William's book that was literally hot off the press.  The book will not be available in stores and for online shoppers until October 6th but William’s publisher is already taking pre-orders. His  publisher describes the new book thusly: "Frustrated by how tough the issues of our time are to solve – racial inequality, our pernicious depression, the troubled relationships we have with other people – Ian Williams new book revisits the seemingly simple questions of grade school for inspiration: if Billy has five nickels and Jane has three dimes, how many Black men will be murdered by police? He finds no satisfaction, realizing that maybe there are no easy answers to ineffable questions." “ While a white man waits for me to answer he is searching his inner Wikipedia for a fact or a current event about the island or continent I am from. Carnival, genocide, pirates, cruise lines, a woman he used to work with, blood diamonds on the soles of her shoes, a-wa a-wa.  The list could be longer. He knows a lot about where I am from whether I am from there or not,” writes Williams in World Problems. Reading the book is not only a bit of puzzler it is also a dexterity test for readers.  Forget page-turner, this is a book turner. The poems are often printed as circles made of words, there are lines printed in the margins in tiny print, and there are printed lines that are stacked vertically and horizontally like a downtown condo! It asks many questions and thankfully provides a response.” The answers appear on the back cover (seriously). Poems appear in between,” he explains. In terms of writing about how he is treated by Canada’s literary establishment, this is probably the last book he can do that now.  He truly is the new establishment. The Scotiabank Giller Prize invited Williams is to announce the 2020 longlist for the Prize.  He did just that on September 8th going live on a host of social media sites and later, on video clips on most TV newscasts. Williams read out the names of a dozen authors in the running for the $100,000 October Prize.  Included in the list was a fellow Caribbean Canadian author! Guyanese Canadian poet and author Kaie Kellough was nominated for his short story collection, Dominoes At The Crossroads, 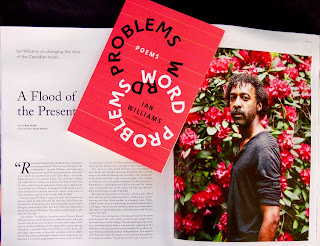 And, if Williams needs anymore September affirmation of his vaunted status, the latest issue of NUVO magazine dropped free on the doorsteps of only homes in the country’s wealthiest postal codes with a six page feature, including two full page portraits of Williams! NUVO magazine call itself the nation’s authority “on all things exceptional—a combination of style and purpose, we feature and profile people, places, and possessions.” Didn’t get a copy?  No worries, it is available free at Nuvo’s website. As well Williams will be online with another famous Canadian writer, Margaret Atwood on November 24th.  According to Williams “we’ll inevitable talk fiction, nonfiction and so much more! 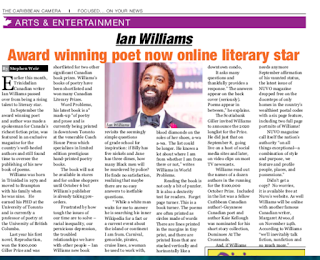