Skip to main content
August 23, 2019
Toronto Carnival Is Losing One Of Its Originals. Roger Gibbs Sings Goodbye.
By Stephen Weir
When September rolls around the Toronto Caribbean Carnival’s Festival Management Committee (FMC) will lose one of its original members. 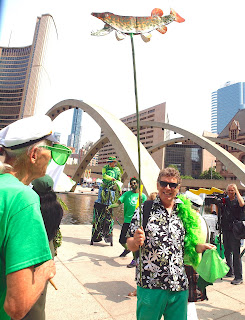 Bajan-Canadian Calypsonian Roger Gibbs has reached the end of his formal board term.  After years of giving sage advice to Carnival, Gibbs will no longer be part of the management team and will not be involved with the 2020 Festival in an official capacity.
“It's been 14 years!” Gibbs told reporter Stephen Weir. “I was invited to join in 2005 by (the late) Charles Roach.”
Gibbs grew up in a musical family and began his career in Barbados singing with Caribbean dance bands in the 1970’s. He joined as lead singer of the Sandpebbles and toured extensively throughout the Caribbean, Canada and the USA.
He came to Canada in 1986, and since then Gibbs has worked non-stop within the arts industry. From 1993 until 2013 he was a performing member of COBA (Collective of Black Artists), one of Canada’s leading Black dance/theatre companies. He has recorded two Classic style Calypso CD’s - ‘Spirit of Calypso’ and ‘Calypso Classics on Guitar’. In 2012 he released ‘Hot So’ with his band Shak Shak and recently came out with the SHAK SHAK PARTY CD.
Within the FMC management team Gibbs shared his knowledge and experience about Calypso music and the business of running festivals and events. “It has been a challenging but artistically rewarding time.,” he continued. “I was able to make the case for a vision of the festival based on the needs and aspirations of our Caribbean Carnival Arts community, the people who create, produce and perform the work the FMC presents and promotes.”
While Gibbs is happy with what he has brought to the table over the course of 14-years, he feels there is still work that has to be done.
“Calypso in Ontario (mostly GTA) is facing the same existential challenge the genre is facing in Trinidad & Tobago – maintaining relevance and connecting with a new generation whose tastes are vastly different,” said Gibbs. “The current model, where OCPA, a membership-driven organization, relies almost exclusively on an annual subsidy from the FMC, is out-dated, unstable and unable to provide the badly needed skill set to lead the development and rebooting of Canadian Calypso. We need fresh blood, new ideas and a funding model supported equally by FMC, public and private sector players, and Calypso programming revenue."
“I did not accomplish my main goal – a permanent addition of a qualified professional Carnival Arts producer position in the FMC’s executive team. I do not agree that you can manage the arts with only financial, business and marketing expertise. The artistic voice must be part of the core of all planning and execution of the Toronto Caribbean Carnival for the organization to truly achieve its potential and gain credibility in the arts and entertainment industry and our Caribbean community."
Gibbs will not be fading away anytime soon.  He continues to perform with Shak Shak and as a solo artist.  He is a popular performer and is always in demand (last night he performed on the Toronto Island). One assumes his involvement with smaller projects within the carnival will continue.
No regrets, no tears goodbye? “I feel the festival has a bright future if we 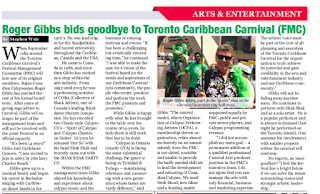