Is Caribana a word in the public domain?

August 29, 2019
By any other name would Caribana smell so sweet?

No matter what you might see on the official logo, for the past 52 years the citizens of Toronto and visiting carnival tourists call this amazing festival and parade simply Caribana.
Caribana is the name that just won’t go away. So embedded is the name in our collective psyche the first Monday in August is always been called the Caribana holiday.
There are Caribana parties, cruises and concerts.  Stores have Caribana specials; hair dresses have stay open late for Caribana treatments. There are even Caribana porno movies!
So pervasive is the name that it appears that no one has ever called an August 1st fete a Lord Simby law Lord Simcoe Day).
The actual word Caribana is trademarked and is owned by the Caribana Arts Group. The CAG is the current name for the organization that came up with the Caribana moniker more than half a century ago.
They have defended their trademark and ownership as best they can. In 2011 they successfully settled a lawsuit with the Scotiabank and the Festival Management Committee (the owners of the current festival known the Toronto Caribbean Carnival).
Why?  Scotia and the FMC violated the trademark when it “named and advertised the festival as the ‘Scotiabank Caribana Festival,’ ” beginning back in 2008.
Looking back now at that $800,000 lawsuit, Knia Singh, the CEO of the CAG at the time, told the Caribbean Camera that “Caribana is the most powerful and important asset owned by the community.”
“The FMC use of the name without the Caribana Board’s permission was the most significant violation of the community’s trademark. It displayed a disregard for the founders of the festival and the community at large.”
After the lawsuit was settled both the sponsoring bank and the Festival Management Committee went to great pains to remove all references to the Caribana name.  As a person who worked in the FMC offices at the time, the Caribana name was only said in whispers and never in public.
Since then things have eased between the trademark owners and the FMC.  Although there is talk of the Caribana name coming back to the parade, it doesn’t appear that the matter is on the front burner.
“To me it is advisable that the current Carnival goes back to calling itself Caribana, “ said Ken Bruzual publisher of the Treasure Chest and one of the pioneers of Caribana. “That is because the name ‘Caribana has entered in the universal public domain.”
Knia Singh says the festival might use the Caribana name again, if it came to a financial arrangement with the CAG in terms of a paying licencing fee. Singh though is not in favour of a straight fee based arrangement.
” They should either work for Caribana or pick a different date and time and start their own festival instead of living off the backs of other people's hard work.
Kal Juman, the FMC sponsor and partnership executive told the Caribbean Camera, that the Caribana name could be brought back but it may have had its day.
“There seems to be a new outlook by many in the community to put the past behind them and to move forward in a more collaborative manner.  If we had the right to use the name, my preference would be to name a specific program or event Caribana.” Juman said. ”Who knows what the future may bring?”
Like Singh, Juman agrees that a Caribana name change could take place but privately isn’t in favour of it.
“ This is my personal opinion and not an FMC’s official position,” he continued. “We are now in 2019 and the festival is no longer for Caribbean immigrants, but rather Canadians who are fans of Caribbean culture.  Plus, every other Carnival in the world does not have a name like Caribana ... they are just called Trinidad Carnival, Miami Carnival, etc. “ 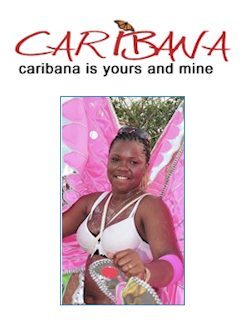 One thing that both the FMC and the CAG agree on, there is widespread misuse of the Caribana trademarked should be curtailed.   As Mr. Singh puts it “Caribana is in the public domain, but it is trademarked, and therefore cannot be used with permission or paying a licence fee if there is an intent to make profit from use of the name.”
There are hundreds of products, events and businesses that don’t give a damn about the Caribana trademark.
Caribana Nike shoes. Asian made skimpy Caribana swimsuits.  Sexy Caribana thongs, Caribbean made Caribana Rum.  There are two major festivals that use the Caribana name – the Barbuda Caribana festival, and the Swiss music festival.   There are Caribana restaurants, Caribana Spanish hotels and the list goes on and on.
“We should work with the rights holder to be able to control the use of the Caribana brand and how it is used for the simple reason that many still refer to the festival by that name,” said Juman. 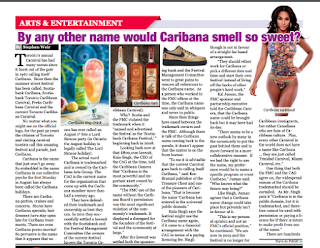 Will it happen soon? Not in a Caribana minute.