August 15, 2019
Tomorrow's Caribbean Camera Tonight!
ROCHDALE – IT’S THE SIXTIES MAN. FREE LOVE AND FREE RENT COME TO TORONTO. BLACK POWER TOO
By Stephen Weir
Do you know what Rochdale College was? No? That probably means that you weren’t alive and living in the Toronto in the late Sixties when Rochdale was the centre of all things counter culture … including Black Power.


It was a large residence on Bloor Street near Spadina and housed over 800 people; most of them love bead-wearing students.  It was launched in 1968 as an experiment in a student run, free form alternative education set in a hippie run co-op.
Rochdale lasted only 8-years.  Closure came when the students stopped paying rent and the building started falling apart. At the time the police and neighbours said it had become a haven for drugs and crime. It was closed in 1975 when the authorities actually welded the front doors shut. Irony of Ironies, it is now a senior’s residence and many of the original residents are now seniors and could move in again!
The rochdale play David Yee originally created is now showing in the SummerWorks under the direction of Nina Lee Aquino, as a project for student actors at York University. Yee won the 2015 Governor General’s Literary Award for Drama and Aquino, among other things, is the artistic director of The Bathurst Street Factory Theatre. At a director’s Q&A Yee told the audience that the play was performed last year at York University with no thought of it ever being shown to the general public.  The 14 actors who appeared in the original play approached Summer Works who immediately agreed to bring rochdale downtown where it belongs!
With a cast of 14 grooving on the garbage strewn set, the hour-long productions moves quickly. You have to pay attention.
It’s 1969. The Vietnam War rages on. Apollo 11 lands on the moon. The Chicago Seven are in chains. Nixon is elected. Trudeau is in office. The FLQ bombs the Montreal Stock Exchange. And in Toronto, Rochdale College – an experiment in cooperative housing and alternative education – is about to become very famous for all the wrong reason.
While the 14 young actors, mostly white, rap about drugs, free love, draft dodgers, Vietnam War, nihilism and hippy poetry, one character, Athena is talking about Black Panther's Huey P. Newton, Malcolm X, Martin Luther King and most importantly racism in Toronto.
Athena with her Sly and the Family Stone Afro is played by recent York U grad 23-year old Claudia Hamilton. This is Group show riffing on the issues of the Sixties but it is Hamilton who owns the stage when she raises a black fist and shouts out about Black issues. Since it was set forty years ago this is really a peak at the genesis of Black Power here in Toronto the Good.
Claudia Hamilton is an actress to watch. Just finishing at York U. she already has two movie roles under her belt. Look for her next year in Believe in You, The Intersection and Days Gone Bye.
Hamilton describes herself as Caribbean -- born in Etobicoke.  Growing up in the Foster Care system, she has found happiness in writing, music and community theatre. “I hope to one day open an organization for young aspiring black artists and unrepresented you to express themselves freely.” 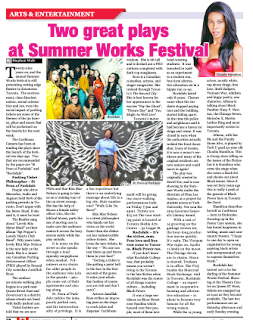 rochdale has turned out to be the darling of the Summer Works Festival. Showing at the Theatre Centre on Queen St West, tickets are snapped up as soon as they become available. The last two performances are on Saturday afternoon and early Sunday evening.