Look Down The Track Senators – Wanda’s Emancipation Train Is Heading For Ottawa.

Stand back  honourable members of the Senate. The Emancipation Train is heading to Ottawa and Senator Wanda Thomas Bernard is going to blow her conductor’s whistle until Canada’s Upper House listens to the voices of the Caribbean and African American communities.
Dr. Bernard championed a bill proclaiming August 1st Emancipation Day in Canada. Even though the legislation was passed by the Liberal Government and made it through two readings in the Senate, it failed to come up for the final vote before the Senate recessed.  The bill will not be brought back for a third and final reading.
At last Wednesday’s Freedom Train Ride in Toronto, the Nova Scotia senator said she is not going to give up.  Speaking to a crowd of close to 1,000 people inside TTC ‘s Union Station she told them  “I am 66 years old and I don’t have to retire (from the Senate) until I am 75. We will not give up anytime soon!” 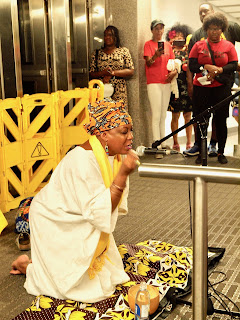 At Right: Libations - Aina-Nia Ayo'dele
For the seventh year in a row there was a special midnight subway train that took hundreds of people from Union Station to the Sheppard West Station. The symbolic special train left the station on July 31st and arrived at Sheppard just after midnight to celebrate the August 1st Emancipation Day.
“This year was our seventh annual Freedom Train ride,” said organizer Itah Sadu.  “ It was an incredible journey and experience! This was second year that the Honourable Wanda Thomas Bernard, has joined us, but this was her first time as our honourary conductor. She had the whistle and gave the call to board the train.”

Also taking part in the Freedom Train ceremonies  were poet George Elliott Clarke, City Councillor Michael Thompson and community organizer Adisa S. Oji. Councillor Thompson brought greetings and a plaque on behalf of the city and Mr. Oji was presented with the Community Resilience Award.
Last week’s train ride marked two important things.  The Underground Railroad which brought former slaves to Canada in the 19th century and the 185th anniversary of Emancipation Day on August 1, when the British Empire abolished slavery in 1834.
The Senator hopes that she will be back next August 1st with an official Federal Government signed Emancipation Day proclamation! 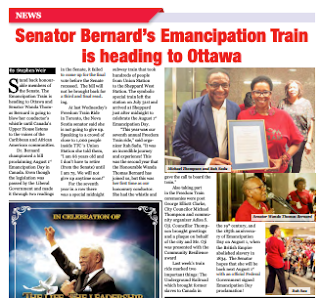