King and Queen Wow Their Subjects 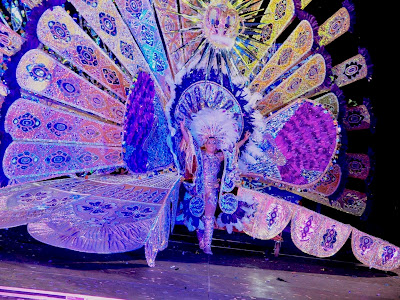 It Doesn’t Get Any Better Than This
By Stephen Weir
The stars glittering above were most certainly aligned.  There will never be a Caribana King and Queen Competition as good as what happened last Thursday night at Lamport Stadium.
What do we mean? In point form here’s why it was an event for the carnival history books. Clear warm skies. No wind. A stadium filled to capacity with hard-core fans of the carnival arts. Drama. Pageantry. And, two big surprises at the podium.
According to Weather Canada, when the gates opened at the downtown soccer stadium, it was a sunny cloudless 25 degrees Celsius. When the contest ended just before midnight it was 20 degrees Celsius – just the right temperature to cool down an estimated audience of 10,000 as they streamed out of Lamport.
Most of the crowd left the open-air stadium long before the winning announcements were made. Those that did stay greeted the names of the new King and Queen with loud gasps and then applause.

What set the stands all atwitter was the news that crowd favourite and reigning queen Celena Seusahai had been dethroned. Seusahai, the driving force behind Tribal Carnival was expected to take the title with her strong performance on stage.  It was not to be, the judges choose Toronto Revellers’ Nicole Brand as this year’s Queen.  She wore Virginia, the Queen of Treasure Island designed by Arnold Hughes.
The winning King costume was worn by Nicholas Guy. He took the crown for Louis Saldenah’s Mas K Camp wearing a costume that he designed himself.
It was a two-sided costume that depicted the final battle of angels and demons, where good triumphs over evil.  Guy costume also captured the coveted annual Innovation in Mas’ Award. 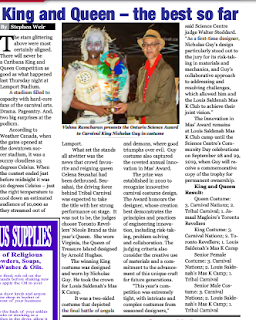 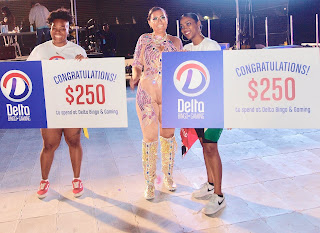 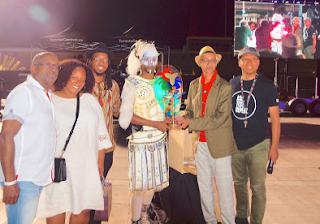