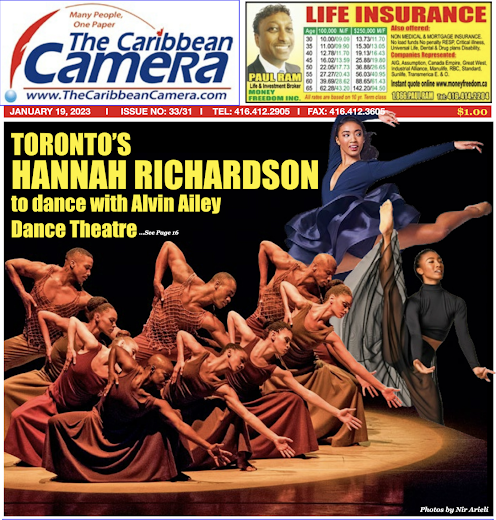 Not only is it the first weekend for Black History Month in Toronto, it will also be two days of first for dance fans.  On February 3rd and 4th “America ‘s Cultural Ambassador to the World” the Alvin Ailey Dance Theatre will kick off its 2023 North American tour with a trio of performances at the downtown Meridian Hall (formerly the Sony Centre).

The 32-member dance troop will be performing for the first time in Canada a new dance — Are You in Your Feelings  — that acclaimed  choreographer Kyle Abraham describes as a “celebration of Black culture, Black music, and the youthful spirit that perseveres in us all.”

Finally and probably most importantly dance lovers in the city are finally going to see Hannah Alissa Richardson perform live on stage with this famed Dance Theatre. This is the Toronto native’s inaugural season with the Company and the first time for her dancing here since before the Pandemic shut down.

This is a sweet homecoming,” Hannah Alissa Richardson told the Caribbean Camera today, “My first time watching Alvin Ailey American Dance Theater was back in 2012, right here in the then “Sony Centre,” now “Meridian Hall". I feel honoured and blessed to make my touring debut with the Alvin Ailey American Dance Theater here in front of my family and friends. And what a privilege it is to kick off Black History Month in Toronto! “

“Apart from zoom performances throughout the pandemic, the last time I danced in Toronto was for several dance videos including one

for Def Jam recording artist Teyana Taylor and another for Toronto based videographer Lee Zavitz,” the 20 something continued.  “Before moving to the US and graduating with honors from The Ailey School, I danced with a competitive dance company, Maple Academy of Dance. I was also part of the cast of Disney Channel’s “Backstage” and Family Channel’s “The Next Step,” both filmed in Toronto.”

The Alvin Ailey American Dance Theater was founded by the late Alvin Ailey in New York city back in 1958. Since then they have performed for over 25 million people in 48 states, as well as 71 countries on six continents. Always a stop on their North American tours, if the three performances on Friday and Saturday in Toronto (matinee and evening shows) follow tradition and are sold out, over 9,000 will see Richardson.

You won’t have trouble figuring out who she is, just listen for the wave of applause when she steps on stage for the first time.  Richardson has deep ties in the city. “I attended Holy Trinity School in Richmond Hill before moving to New York for my post-secondary education at The Ailey School,” she explained “I come from a

Trinidadian and Filipino background. My father was born in Port of Spain and my mother was born in Manilla. I am proud of my culture. It gives me the basis to appreciate a variety of dance styles and forms.”

Both the Friday and Saturday night evening performances begin at 8 pm. The curtain raises at 4pm for the Saturday matinee performance. At every performance, the inspiring finale will be Alvin Ailey’s American masterpiece Revelations acclaimed around the world for sending hearts soaring and lifting audiences to their feet. Since its debut in 1960, Revelations has been seen by more people around the world than any other modern dance work.