15 DOGS, ALL OF THEM HUMAN ON STAGE IN TORONTO 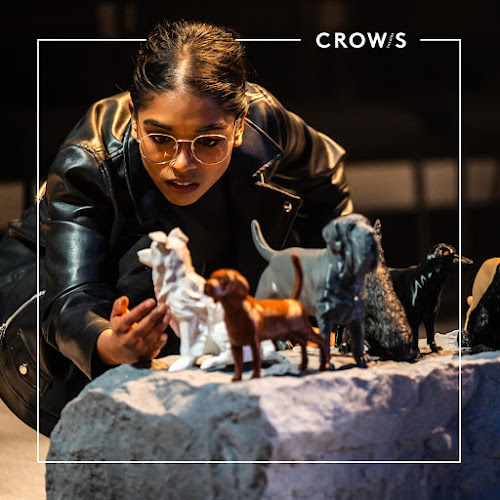 Woof. Woof. Who let the dogs out? The Crow’s Nest Theatre in downtown Toronto is quick to answer that it is Caribbean Canadian author Andre Alexis who is to blame.

For almost two weeks the Carlaw Avenue theatre has been selling out each and every performance of their new play “Fifteen Dogs”.  The new work is based on the award winning novel  by Alexis which won the Giller Prize, the Rogers Writers’ Trust Fiction Prize, and Canada Reads  back in 2015.

The book has been adapted for the stage by Marie Farsi and has received funding in part from The Hilary and Galen Weston Foundation and the Canadian Literature Adaptation Fund.

The play follows the book storyline which begins with two Greek Gods – Hermes and Apollo, drinking in a seedy Toronto tavern. They make a bet to what will happen when they grant 15 dogs human consciousness. They watch from above as the pups discover the pitfalls of complex thought and emotion.

In this modern-day fable of fate, faith, love, and language, the pack must reckon with morality and mortality and the profound relationships they share with humans.

No dog costumes are used in the two-and half-hour performance. The cast, many of them Stratford veterans, rely on their body language and a few props to entertain the humans in the standing room only theatre.

Crow’s Nest Theatre has been posting on social media lately warning theatre goers that they should buy tickets as soon as possible because of the overwhelming demand for tickets. Fifteen Dogs opened January 10 and runs to February 12. 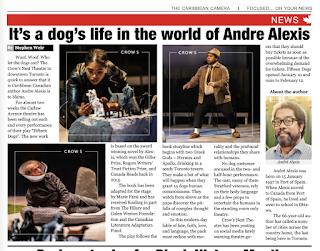 André Alexis was born on 15 January 1957 in Port of Spain. When Alexis moved to Canada from Port of Spain, he lived and went to school in Ottawa.  The 66-year-old author has called a number of cities across the country home, the last being here in Toronto.