Play title turns off the men, but women immediately get it at the Fringe Festival 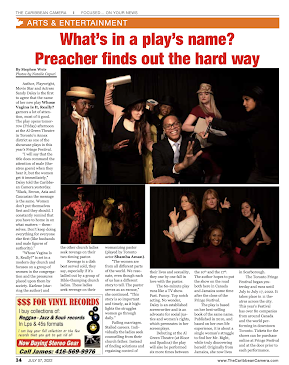 By Stephen Weir
Author, Playwright, Movie Star and Actress Sandy Daley is the first to agree that the name of her new play Whose Vagina Is It, Really? really does garners a lot of attention, most of it good. The play opens tomorrow (Friday) afternoon at the Al Green Theatre in Toronto’s Annex district as one of the showcase plays in this year’s Fringe Festival.

“I will say that the title does catch the attention of male (theatres goers), the women get it immediately,” Daley told the Caribbean Camera yesterday. “Black, Brown, Asia and Caucasian the message is the same. Women don’t put themselves first. I constant remind that you must home in what matters – themselves. Don’t keep doing everything for everyone else (like husbands and other make figures).”

“Whose Vagina Is It, Really?" is set in a church and focuses on women and the pressures placed upon them by society. Karlene (played by the author) and the other church ladies seek revenge on their two-timing pastor. Revenge is a dish best served cold, they say, especially if it's by some bible-thumping church ladies. These ladies, seek revenge on their womanizing pastor (played by Toronto actor Shamba Aman). 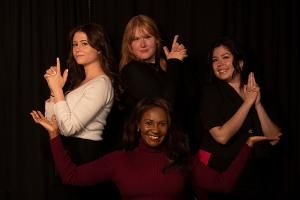 “The women are from different parts of the world. We resonate, even though each of us has a different story to tell. The pastor serves as an excuse,” she continued. “This story is so important and timely, as it highlights the struggles women go through daily.”

Failing Marriages. Stalled Careers. Individually the ladies seek counselling from their church father. Instead of finding solutions and regaining control of their lives and sexuality, they one by one fall in love with the pastor. 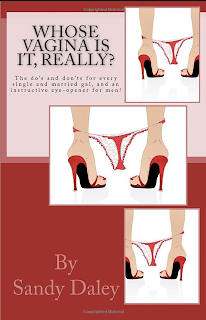 The 60-minute play runs like a TV show. Fast. Funny. Top notch acting. No wonder, Daley is an established screenwriter and is an advocate for social justice and women’s rights, which permeates in her screenplays.

Debuting at the Al Green Theatre (at Bloor and Spadina) the play will also be performed six more times between the 10th and the 17th.  The author hopes to put the show on the road both here in Canada and Jamaica sometime after the close of the Fringe Festival.

The play is based on her best-selling book of the same name. Published in 2010, and based on her own life experience, it is  a story about a single woman’s struggle to find her Mr. Right, while truly discovering herself. Originally from Jamaica, she now lives in Scarborough.

The Toronto Fringe Festival began on Wednesday and runs until July 17, 2022. It takes place in 11 theatres across the city.  This year’s Festival has over 80 companies from around Canada and the world performing in downtown Toronto. Tickets for the shows can be purchase online at Fringe Festival and at the door prior to each performance.