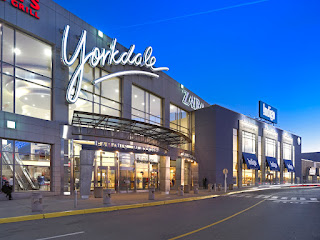 Stephen Weir: Post Covid days in Toronto are strange times indeed. Who’d ever guess that the place to get a good fix of 2022 Carnival magic is inside the posh super mall, Yorkdale.  And, totally out-of-character for all that makes Yorkdale a to-die for shopping experience, Carnival Portal is a new carnival happening that is admission free!
Located at the Allan Expressway and Highway 401, the indoor mall is better known for selling $100,000 watches and Tesla cars indoors than having a pop-up portal of the Caribbean Canadian Carnival Arts.  Carnival Portal, a joint project of the City of Toronto and Oxford Properties (owners of Yorkdale) which opens today (June 23rd) and runs to September 4th celebrates all that is carnival.
The exhibition, located in the middle of the mall, is divided into two rooms: one displaying costumes, headpieces and photography, the other is an augmented and virtual reality experiences zone.
In the first room, explore the future of Carnival costume-making through the work of SugaCayne Design’s Candice Dixon. As well, the art show on display is curated by her husband Dwayne Dixon. He has chosen a number of Canadian, British, St Lucian and Trinidadian artists to strut their creative largess.
Trinidadian-Canadian photographer Ms Jenny Baboolal, will be hanging her Trinidad and Tobago Carnival photographs, many of which have been featured in the back issues of the Caribbean Camera newspaper.
Caribbean culture and history through the video work of Fiona Compton will be in the portal as well.  She is a London based Saint Lucian photographer, filmmaker and historian. Compton’s films have been screened across the globe, winning several awards, including Best Documentary and Best Director for Caribbean Film and Fashion Awards. 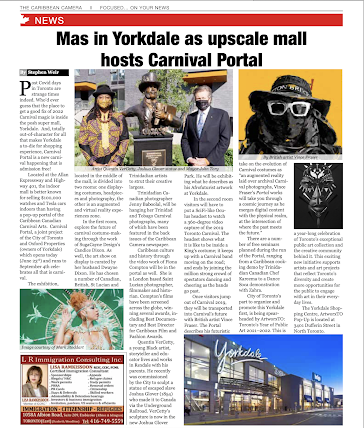 Quentin VerCetty, a young Black artist, storyteller and educator lives and works in Rexdale with his parents. He recently was commissioned by the City to sculpt a statue of escaped slave Joshua Glover (1854) who made it to Canada via the Underground Railroad. VerCetty’s  sculpture is now in the new Joshua Glover Park. He will be exhibiting what he describes as his Afrofuturist artwork at Yorkdale.
In the second room visitor will have to put a SciFi-like Oculus headset to watch a 360-degree video capture of the 2019 Toronto Carnival. The headset shows what it is like to be inside a King’s costume; it keeps up with a Carnival band moving on the road; and ends by joining the million strong crowd of spectators dancing and cheering as the bands go past.
Once visitors jump out of Carnival 2019, they will be transported into Carnival’s future with British artist Vince Fraser. The Portal describes his futuristic take on the evolution of Carnival costumes as “an augmented reality laid over archival Carnival photographs, Vince Fraser’s Portal works will take you through a cosmic journey as he merges digital content with the physical realm, at the intersection of where the past meets the future.”
There are a number of free seminars planned during the run of the Portal, ranging from a Caribbean cooking demo by Trinidadian Canadian Chef Kareema to a Dance Soca demonstration with Zahra.

The City of Toronto’s part to organize and promote this Yorkdale first, is being spearheaded by ArtworxTO: Toronto's Year of Public Art 2021–2022. This is a year-long celebration of Toronto’s exceptional public art collection and the creative community behind it. This exciting new initiative supports artists and art projects that reflect Toronto's diversity and creates more opportunities for the public to engage with art in their everyday lives.