Your Ass Is Grass - Astroturfing in Ontario

YOUR LYING ASS IS FAKE GRASS Even though the root of the word Astroturfing has largely disappeared from our current vocabulary, here in Ontario it is a term that is very much a part of the political lexicon.

Back in 1968 the Houston Astrodome became the first NFL stadium to install artificial grass on its indoor football field. First called ChemGrass, the phony turf soon was dubbed AstroTurf by sports announcers. Fans watching the first game on Astroturf liked what they saw, a perfect green field with clearly marked yard lines and unsmudgeable advertisements. What they didn’t see was the concrete and dirt underneath.  The players hated it: despite looking like soft turf it was all a lie - it really hurts when tackled on the Astroturf. Injuries abounded. Makes sense that now in the 2020’s the term Astroturfing refers to a rather nasty, expensive, probably illegal bit of political chicanery.

Technically speaking it is the practice of hiding the identity of the individuals or groups (i.e., politicians, product advertisers, churches, fundraiser etc) who dream up and spread, through a full spectrum of media vehicles, messages that appear to have come from grassroots groups. The messaging appears to have the wholehearted support of the grassroots organizations they mimic, but in reality, those groups don’t know about the messaging until they accidently come across it.

Two-years ago when there were two by-elections being fought in Ontario and a series of teachers’ strikes, an expensive full-page ad appeared in the Toronto Star, The Globe and Mail, National Post, and the Toronto Sun.  (The Star’s book rate for a full-page ad was $35K at the time).  A second full page ad follow-up was then placed in the papers. 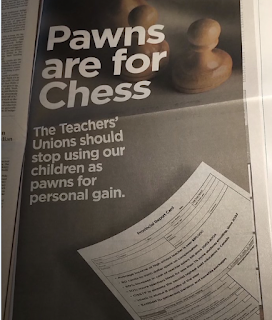 An unknown group, Vaughan Working Families, had placed the ads, dunning Vaughan teachers. It accused Vaughan (a suburb of Toronto) teachers and their union of using children as “pawns” during rotating strikes across the province. The lie-filled ad appeared to be on behalf of a well-meaning local parent group and was accompanied by a series of planted propaganda news items and social media postings.   The name Vaughan Working Families had been created by a lawyer two years previously but was dormant since conception.  There was however a union sponsored group that was active in the community and called itself the Working Families.

Premier Doug Ford’s office denied that his government was behind the Astroturfing. An investigative reporter from the Toronto Star tracked the ad buys back to Vaughan lawyer Quinto Annibale. He is a well-known long-time Tory party member who had only a few months before, been appointed by Ford’s government to be vice-president of the LCBO – a well paying position.  Ultimately Annibale admitted to posting and paying for the ads. He admitted that the real union friendly Working Families group had nothing to do with the ads at all.

Astroturfing is an expensive insidious method of spreading lies while hiding behind the name of grassroots organization. How do political operatives in the short run, get away with planting the seeds of the insidious Astro Turf?  It speaks to the sorry state of the media in Canada today. Falling ad sales.  Falling readership/viewership and listening audiences, have caused massive layoffs of trained journalists. Media outlets are being sold and closed.

Although the major Toronto dailies do have reporters on the “education beat”, Vaughan schools are part of the York Region School Board and not considered to be on Toronto media’s radar. The 21 year old Vaughan Citizen has been now rolled into three other Star owned community papers and now shares photographers and reporters with the other editions – it is distributed for free twice  a week.  It appears they did not cover the Vaughan Astroturfing Scandal.

The power of the advertising department has increased dramatically in all major media outlets (radio, tv and print) as well as in social media giants including Facebook and LinkedIn. The need for money is so important that their standards for what is considered a truthful and acceptable advertisement has slipped. The mighty dollar has heavy influence on the newsroom.

For the papers that ran the Vaughan anti teacher ad, it was manna from heaven (Queen’s Park?). When the Toronto Star investigated the Vaughan Astroturfing scandal its own advertising department wouldn’t reveal who booked and paid for the two full pagers. The paper was never able to prove that the Conservative insider who booked the ad had the support and funding of the Ford Government.

Astroturfing – The political manipulation of public opinion continues in Ontario. After the dust settled on the Vaughan scandal, CTV News reported that it had uncovered that Ford minister of finance, Peter Bethlenfalvy, used cabinet resources for a Blue "social media advertising campaign". Why?  To boost his "likes" on Twitter, Facebook and Instagram.

Astroturfing has not disappeared in Ontario, people planting seeds in the media have just become better gardeners.