Caribbean Carnival Photographer On Track For The 2022 Grand Parade.

TAKING IT TO THE STREETS By Stephen Weir Photographer Anthony Berot is taking his art to the streets, even if it means that he and his Mas Model must be prepared to dodge cars, bikes, and bell ringing streetcars.  For the past 12-years Berot has been the official photographer of the Toronto Caribbean Carnival taking pictures of it all, costume launches to the Grand Parade. And now as of Sunday night as the last costume launch ends, Berot is posting samples of all of the 2022 costume events.

Pictured above is Mas Model and NBA Dancer for the Toronto Raptors Mohogany Brown poses for Berot on Queen Street West outside of the LuLu Lounge after the end of Sunday night’s SugaCayne costume fete. The portrait was taken without flash, instead he used street lights, shop window reflections and the glare of oncoming traffic did get the trick done. 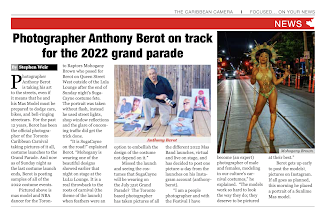 “It is SugaCayne on the road!” explained Berot. “ Mohogany is wearing  one of the beautiful designs showed earlier that night on stage at the LuLu Lounge. It is a real throwback to the roots of carnival (the theme of the launch) when feathers were an option to embellish the design of the costume, not depend on it.”

Missed the launch and seeing the costumes that SugaCayne will be wearing on the July 31st Grand Parade?  The Toronto based photographer has taken pictures of all the different 2022 Mas Band launches, virtual and live on stage, and has decided to post one picture-a-day from the launches on his Instagram account (anthonyberot). 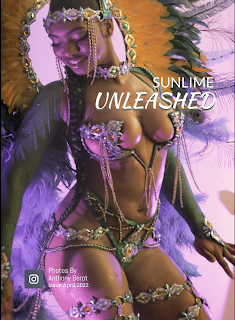 “I am a people photographer and with the Festival I have become (an expert ) photographer of male and females, modeling in our culture’s carnival costumes,” he explained.  “The models work sohard to look the way they do; they deserve to be pictured at their best.”

Berot gets up early to post the models\ pictures on Instagram. If all goes as planned, this morning he placed a portrait of a Sunlime Mas model (pictured at left).