Desmond Coles win the Toronto Book Award for walking the walk and writing about it. 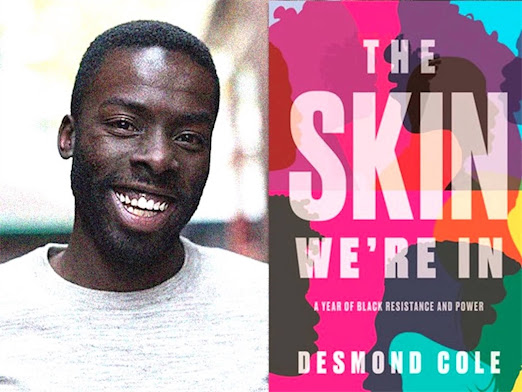 By Stephen Weir: Often called the human launch pin to Toronto’s Black Lives Matter movement, writer and broadcaster Desmond Cole has just been awarded the 2020 Toronto Book Award for his memoir “The Skin We’re In: A Year of Black Resistance and Power”. The annual civic book award ceremony is usually held at the Toronto Reference Library, but this year was held virtually on Monday night.

The prize was presented live on line by Paul Ainslie city councillor for Scarborough-Guildwood and a member of the Toronto Public Library Board. Cole takes home $10,000 and four finalists receive $1,000 each.

Also in the running for the Prize was Jamaica Canadian writer Zalika Reid-Benta (Frying Plantain), Katie Daubs (The Missing Millionaire), Vivian Chong and Georgia Webber (Dancing After TEN) and Jean Marc Ah-Sen  (In the Beggarly Style of Imitation)

Cole’s book, according to his publisher, “chronicles just one year—2017—in the struggle against racism in this country. The year witnessed the profound personal and professional ramifications of Desmond Cole’s unwavering determination to fight injustice. In April, Cole disrupted a Toronto police board meeting by calling for the destruction of all data collected through carding.”

His editors told following the protest, Cole, then a columnist with the Toronto Star, that his activism violated company policy. Rather than dial back defending Black lives, Cole chose to quit and become a freelance writer.

In July, at another police board meeting, Cole challenged the board to respond to accusations of a police cover-up in the brutal beating of Dafonte Miller by an off-duty police officer and his brother. When Cole refused to leave the meeting until the question was publicly addressed, he was arrested.Month-by-month, Cole creates a comprehensive picture of entrenched, systemic inequality. Urgent, controversial, and unsparingly honest, The Skin We’re In is destined to become a textbook for anti-racist and social justice movements in Canada.

“ This has been a very difficult year, and yet I have been blessed, ” said Cole in an online message following the presentation. “ This prize is another blessing”

Cole said he would be donating half of his winnings to worthy causes.  He will be giving $2,500 to a cause that supports Black trans women. The other $2,500 goes to the Encampment Support Network, which helps the homeless living in tents and make-do shelters here in Toronto.