All Aboard: Saldenah Launches His Very Big Band 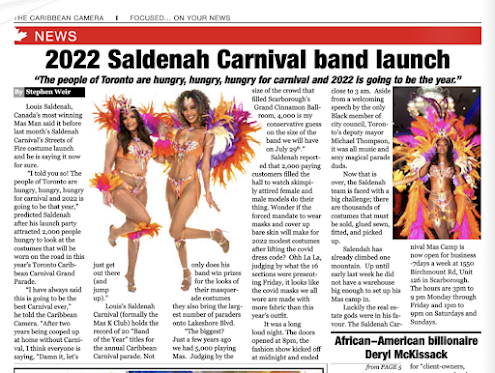 By Stephen Weir Louis Saldenah, Canada’s most winning Mas Man said it before last month's Saldenah Carnival’s Streets of Fire costume launch and he is saying it now for sure.

“ I told you so! The people of Toronto are hungry, hungry, hungry for carnival and 2022 is going to be that year, ” predicted Saldenah after his launch party attracted 2,000 people hungry to  look at the costumes that will be worn on the road in this year’s Toronto Caribbean Carnival Grand Parade.

“ I have always said this is going to be the best Carnival ever,” he told the Caribbean Camera. “After two years being cooped up at home without Carnival, I think everyone is saying, “Damn it, let’s just get out there (and jump up).”

Louis’s Saldenah Carnival (formally the Mas K Club) holds the record of twenty “Band of the Year” titles for the annual Caribbean Carnival parade. Not only does his band win prizes for the looks of their masquerade costumes they also bring the largest number of paraders onto Lakeshore Blvd. 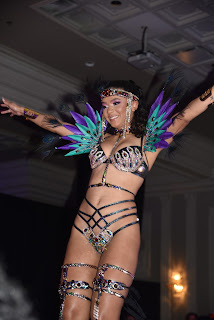 “The biggest? Just a few years ago we had 5,000 playing Mas.  Judging by the size of the crowd that filled Scarborough’s Grand Cinnamon Ballroom, 4,000 is my conservative guess on the size of the band we will have on July 29th.”

Saldenah reported that 2,000 paying customers filled the hall to watch skimpily attired female and male models do their thing.  Wonder if the forced mandate to wear masks and cover up bare skin will make for 2022modest

Ohh La La, judging by what the 16 sections were presenting Friday, it looks like the covid masks we all wore are made with more fabric that this year’s outfit. 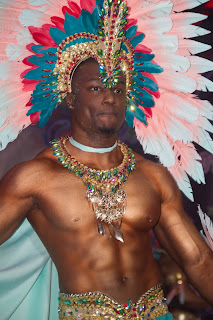 It was a long loud night. The doors opened at 8pm, the fashion show kicked off at midnight and ended close to 3 am.  Aside from a welcoming speech by the only Black member of city council, Toronto’s deputy mayor Michael Thompson, it was all music and sexy magical parade duds.

Now that is over, the Saldenah team is faced with a big challenge.There are thousands of costumes that must sold, glued sewn, fitted, and picked up.

Salendah has already climbed one mountain.  Up until early last week he did not have a warehouse big enough to set up his Mas camp in.

Luckily the real estate gods were in his favour. The Saldenah  Carnival Mas Camp is now open for business 7-days a week at 1550 Birchmount Rd, Unit 126 in Scarborough.  The hours are 3pm to 9 pm Monday through Friday and 1pm to 9pm on Saturdays and Sundays. 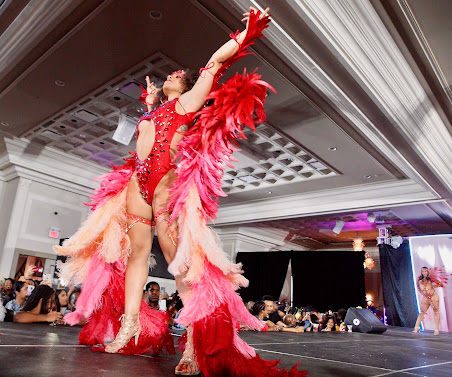