For The Caribbean Camera Everything Is Local

The Caribbean Camera Newspaper just celebrated its 21st anniversary.  If there had been a party, we might have been able to get publisher Anthony Joseph (pictured below) to tell us how he manages to keep the Toronto Black community newspaper afloat during a time when he is unable to sell advertising; distribute his 24-page weekly newspaper; and pay journalists (including me) all since the arrival of the Covid shutdown.

The paper and its online website is considered the voice of the Caribbean community in the GTA.  The paper is written by journalists who have a connection with the Caribbean (most learned their trade in Trinidad) except me. The 65-year old publisher gives his 80 something Trinidadian born editor a small honourium, has assist with his basement digs and from time-to-time makes sure that the editor gets his three solids. Everyone else fends for themselves.

Pre-Covid the Caribbean Camera was given away free at Patty Shops, Roti Huts, Soca Clubs and Caribbean Grocery stores. Most of the businesses that distributed the newspaper also advertise in it. There isn’t an ad rate for Caribbean advertisers; it is cash, barter or vague promises of “next week, Boss”. There is an establish rate for government, political and corporate ads; It is very high in comparison to their circulation numbers. Most of the full-page government messages are pity ads – money meant to keep the Black paper afloat rather than actually reach its readers with important news. 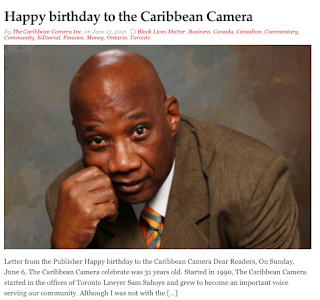 The paper has a very small press run (best kept secret is the exact size of the press run) and a small daily following for its website.  It now has an equally secret mailing list for subscribers who receive the paper as a digital PDF.

It is a business plan like no other, and it has worked until the Pandemic shutdown the paper’s distribution points and advertising base.  No ads. No readers. No journalists. No place for readers to pick up an actual physical paper.

What the Caribbean Camera did was create a digital version of the paper that is emailed to readers every Thursday.  There are usually 20 pages of content, including paid government and political ads. The rest of the advertisements are local and placed complimentary by the paper to fill it up and to make it appear that the paper is surviving, unlike some of its competitors.

With no journalists left creating news items, the publisher and elderly editor have taken to removing bylines and rewriting CBC.ca, The Canadian Press News and Caribbean daily newspaper stories to appear as if they were written by their now gone staff.  Newswire pictures are screen shot, altered, reversed and often mashed in with other photographs before running in the digital edition.

Apparently mainstream media don’t use plagiarism software, to date the Caribbean Camera has not been nailed for copyright infringement.  It could be that Mass Media is aware that their material is being brazenly borrowed (as what many other community papers do) and just consider its circulation numbers too small to be bothered taking action against.

The digital editions of the paper have not yet found traction within the older Caribbean Canadian audience.  Thursday morning at Timmy’s with a table filled with white haired seniors reading the Camera is not the same as receiving a PDF on one’s Smart Phone.

The Camera is now faced with a problem of how to find new readers for its free digital paper.  How does a paper reach people with a subscription offer when its only vehicle, the digital paper isn’t being read? A daunting task yes, but, that is where today’s website paper kicks in. 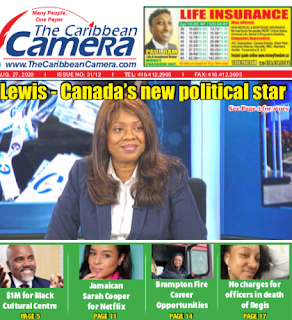 Publisher Anthony and his New York based brother, look after the website, using an outdated software package to keep it barely going.  Most of the stories posted on the splash page directly speak to the Caribbean Canadian experience – food issues, immigration woes, Black Lives Matter events and the plight of the under siege Little Jamaica community (the constantly delayed construction of a streetcar line through the community causing the closure of Jamaica restaurants, food stores, clothing outlets, funeral homes and pot shops) are usually featured on the splash page.

The stories are chosen not for the timeliness, but rather because they speak directly to the very basic needs of their readership.  When the digital paper is issued, one or two of the new news items do migrate to the website, but, none of the old stories are removed; they just get pushed to the back.  There are a few house ads on the website, but the news items don’t directly generate money for the site. The publisher uses the articles as a come-on to solicit new subscribers to receive his free or nearly free digital newspaper.  As the digital mailing list grows, so too do the advertising opportunities for the paper. The paper will begin printing every second Tuesday beginning in July.  Increasing the size of the print run raises publishing and delivery costs, but having a much larger email list for his digital paper costs nothing.

Stories and photographs that get pirated from mainstream media tend not to be posted on the website, probably in fear that a Google news bot will post the stolen stories items on Google News and the original copyright holders will see them.  However, the software used to create the news website (pictured above) is ancient; it doesn’t translate well when viewed on most modern tablets and cell phones.  The text is tiny, columns are wonky and photographs slide all over the screen. As a result Google gives only cursory mention of the posted stories.

Of course the model for Caribbean Camera doesn’t make sense, no matter what the publisher might tell us. Will the paper survive? Only if Mr. Joseph continues to work 7-days a week, his car doesn’t break down; neither Google News nor his many creditors find him; his 88-year old editor doesn’t die and most importantly the governments and institutional advertisers never bother to see what they are actually getting for their ad buys. After posting this in early June I learned that the editor had either walked out or had been fired. Stand by for updates.