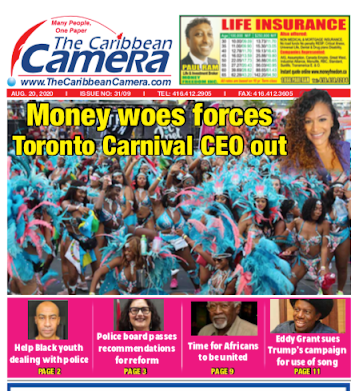 Goodbye to Aneesa Oumarally. The Caribbean Camera has learned that the 40-something lawyer is no longer at the helm of the Toronto Caribbean Carnival. Veteran carnival administrators Denise Herrera-Jackson and Chris Alexander are now running the annual festival.

In a conversation with me (Stephen Weir) Ms. Oumarally explained that she had not been fired and that the decision to leave the Festival was made after discussions with the Festival Management Committee Board about the future of the 53-year old festival. Oumarally, a well-respected Mississauga lawyer is returning to the practice of law but will keep her hand in Carnival by re-joining the Festival Board.

The Festival Management Committee (FMC) Chair, Joe Halstead, confirmed her comments.  “ She wasn’t terminated,” he said in a taped interview. “I think there may be some misconceptions but this is a very simple matter. The FMC, as you know, did not have a Festival this year and clearly the prospects for next year are vague.  We don't know where we are going to stand next year (because of Covid public health rules) so we have decided that we must cut our costs.”

“We do not have the revenues (for 2021),“ he continued.  “When we look at what costs we are going to have (without a 2020/21) revenue stream, salaries are a big part of that. We decided we can’t carry the salary of half the Carnival staff. It is not only the CEO; there are others we have had to do this to (Naila Seunath the information manager is no longer with the carnival) in order to cut costs. It is as simple as that.”

“We don't know where the money is going to come from and we don't know what the future looks like. At this point we can’t carry the burden of our entire workforce.”

In addition to the loss of the CEO and her information manager, the salaries of both Herrera-Jackson and Alexander have been cut by a reported 40 – 50 percent. According to the Chairman those who have left the Festival could be rehired and cut salaries restored if funding becomes available.

“In August 2019, I took a leave of absence from law to take on the role of CEO of the Toronto Caribbean Carnival,” Oumarally recently posted on LinkedIn. “This was not a role I applied for. At the time, I was the Chair of Governance of the (Toronto Caribbean Carnival) Board. I agreed to a one-year term. The understanding of my role was to add governance expertise to the organization, especially in the way we conducted our business, with a goal to increasing revenue.”

She left the Board and became an employee of the Festival in a year of turmoil.  Shortly before the 2019 parade, Richard de Lima, the Festival’s CEO of just six months, had his two-year contract abruptly terminated.  Soon after that, parade operations manager, Gerard Weekes suddenly resigned and returned to his home in Trinidad.

The festival went ahead as scheduled without a name sponsor or much corporate support. Oumarally and members of the FMC’s governance committee took over responsibilities of the CEO and were able to stage the festival. Their parade was held as scheduled but there was a noticeable decline in attendance, there was friction along the parade route, and there were hours long gaps on the road.

Following the parade Oumarally put aside her law practice and came on full-time to manage the coming 2020 festival. As fall approached the winds of change continued, long-time office manager Margo Harris retired and sponsorship marketing wunderkind Kal Juman resigned and took on a similar role with the Taste of the Middle East Festival.

“Our planning for the upcoming festival seemed to be strong; we found ways to grow potential revenues, but we would not have actually known if we were successful until the festival,” she continued.

Those plans were dashed when the parade was axed because of the Covid-19 shutdown.   Although the annual fete, be it named Caribana or the Toronto Caribbean, has tittered on the brink of collapse it  has never missed holding the world famous Grand Parade … until 2020.

The carnival loss devastated the city, not just for the loss of a world event but also in terms of the collapse of the Black tourism travel industry into the city and the nuclear sized hit the city’s entertainment sector took.

Even though the carnival was shuttered its cash box was not. Money has come into the festival coffers.  Sources at City Hall, Queen’s Park and Ottawa estimate that over $850,000 in grant money has been given the beleaguered festival to help soften the Covid blow.

The Caribbean Camera newspaper was told (who then told me) that the City of Toronto gave the Festival $625,000, the Federal Government (through Heritage Canada) gave $128,100 and the Province handed over $100,000.

In terms of cash outlays, in addition to staff salaries, rent and an estimated $80,00 Mas band expenditures it is thought that the Virtual Road August 1st all-day on-line carnival cost $60,000.

The war chest is meant to cover this year’s costs and fund in part the Festival in 2021.  The ongoing Covid crisis means that the FMC doesn’t know what kind of Festival it will be allowed to stage and what sort of additional funding and sponsorship it could raise to make 2021 happen. It is possible they may not be allowed to hold the festival next year, or even the year after.

“500,000 to 700,000 is a lot of people and we are not going to get a city permit unless people are able to assemble,” explained Halstead. “Public Health clearance is the only way can hold assemblies like ours.” 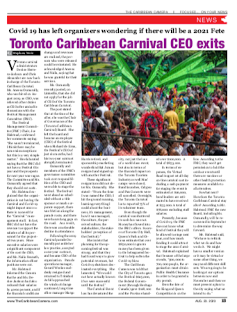 Even the fate of the popular King and Queen Competition is on the line. According to the FMC, they won’t get permission to hold the outdoor event until there are vaccines or other health protection measures available to all attendees.

So what next?  How does the Toronto Caribbean Carnival stay alive? According to Mr. Halstead, their board, including Ms. Oumarally, will be reconvened in September to figure out what they how they proceed, be it in 2021 or 2022 or beyond.

“We have to rethink what we do and how we do. It may be a smaller version or it may be virtual or some other thing,” he said.  “We may need different skill sets. We are going to be looking at our options between now and November and then we must present a plan to the city saying what we intend to do!