April is StretchMas time in Toronto

March 06, 2020
A Fete of Epic Proportions – April is full of Energy
By Stephen Weir
April is StretchMas time in Toronto. Stretch (aka Jerrol Augustine) the popular bandleader of EPIC Mas knows how to put on a fete.  And, on April 18th his band is going to show the city just how exciting a costume launch can be.
The number one medium sized band in the 2019 Toronto Caribbean Carnival parade is holding an early launch at the large Cinnamon Banquet Hall on McNicoll Avenue in Scarborough.
“Our theme for 2020 is ENERGY,” said Augustine when speaking to the Caribbean Camera yesterday. “Energy is one of the pillars of what EPIC Carnival stands for.  E.P.I.C or Energy. Passion. Imagination and Culture. We want our masqueraders to release their energy on the road with us this year!”

Epic is one of the first competing bands to hold a costume launch in 2020.  They will have ten sections on stage presenting costumes under the Energy theme. With still a month to go before the fete, the Mas Band may add a few more sections as costumes become available.
“We have a performer Grenadian Soca Artiste Skinny Banton (Soak It Good and Front Yard Wet) coming for the launch so it will not only be a costume showcase but a entertaining party full of Artistic energy!”
“ We have been working on this since early January,” continued Stretch. “Our goal is get people involved and signed up for the 2020 Toronto Caribbean Carnival Parade.  I know we can grow our numbers get so that we can compete as a Big Band in the parade.”EPIC has brought on De Limers Inc. to put on the coming launch. They are a popular event promoting company that describes itself as “a Business founded on the simple principles and pleasures of Limin’.”
“Our Mas Camp is not yet determined but we will have registration on our website after the launch,” said Stretch. “We will have early registration for those that want to save their spot with the band. We are very active on Instagram (@epic_carnival), so your readers should look for us there!” 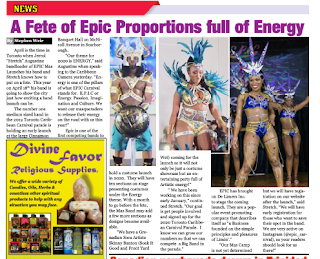