Trinidadian Canadian Wins The $100,000 Giller For His First Novel: Reproduction 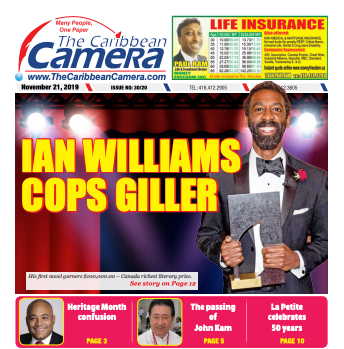 Salad Days of Literature Brings Lots Of Cabbage to Ian Williams
These are salad days for Caribbean Canadian authors. Earlier this week another Trinidadian-born author won big, really big, and the country has sat up and taken notice.
On Tuesday evening Ian Williams won the 2019 Scotiabank Giller Prize for his very first novel “Reproduction”, published by Random House Canada, taking home $100,000.
Earlier this month Trinidadian Canadian author André Alexis won big as well capturing the $50,000 Writers’ Trust fiction prize for his English language novel “Days by Moonlight”. He is only the second author in the country to capture the award twice. 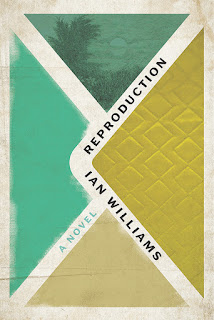 Days by Moonlight is his seventh novel. The book is about Alfred Homer who takes a Southern Ontario road trip to investigate the story of John Skennen, a poet whose ghost haunts a few souls around the province.
If the two men won big, two other writers Trinidadian Canadians David Chariandy and Jamaica Canadian Lorna Goodison went nuclear when they were awarded US$165,000.00 each. They both won 2019 Windham–Campbell Literature Prizes; he for fiction and she for poetry. The pair was chosen for their “literary achievement or promise” and the reward money of $165,000.00 each would support their continued writing.
While the Windham-Campbell Prize is one of the richest in the world, here in Canada the Giller has the highest profile. When the Giller announcement was made the nation watched and listened. The gala was broadcast Ian Williams live on CBC TV, CBC Radio and CBC.CA.
The actual award was presented to Williams at a black-tie dinner and award ceremony hosted by Canadian singer-songwriter and actress Jann Arden and attended by 450 members of the publishing, media and arts communities. 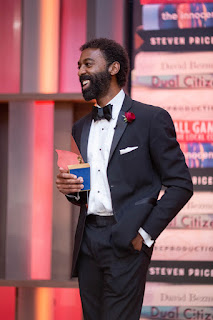 The 38-year-old Williams, who is known for his work in poetry, won with his first novel “Reproduction”. The book tells the story of three generations of a Caribbean Canadian family living in Scarborough.
Williams left T&T in 1988 and moved to Brampton with his older brother and parents. He turned out to be a brilliant student earning his doctorate in English at just 25 years of age. He is currently an assistant professor of poetry at the University of British Columbia.
There were many other Caribbean Canadian authors to win major literary prizes this year including:
• Poet Dionne Brand was born in Guayaguayare, Trinidad and Tobago in 1953. Now a Canadian, the Toronto resident won The Blue Metropolis Violet Prize in April. The $5,000 Prize is a Canadian literary award, presented to an established LGBTQ writer to honour their body of work.
• Amanda Parris, who has Grenadian and Venezuelan ancestry, was born in London, England, and was raised on the south side of Jane Street in Toronto. Earlier this fall she won the $25,000 Governor General English Language Drama Award for her script of her play the Other Side of the Game. 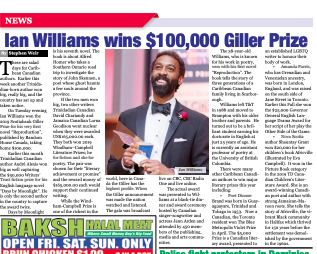 • Nova Scotia author Shauntay Grant won $20,000 for her children’s book Africville (illustrated by Eva Campbell). It won in the Picture Book category in the 2019 TD Canadian Children’s Literature Award. She is an award-winning Canadian poet and author with strong Jamaican-Maroon roots. She tells the story of Africville, the vibrant Black community in Halifax which thrived for 150 years before the settlement was demolished by the province in the 1960s.