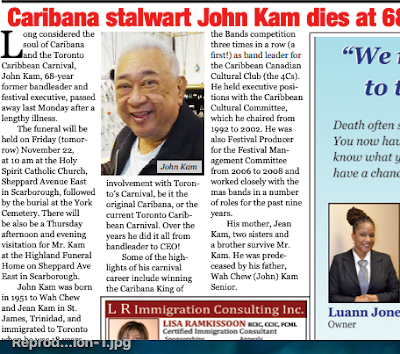 Long considered the soul of Caribana and the Toronto Caribbean Carnival, John Kam, 68-year former bandleader and festival executive, passed away last Monday after a lengthy illness.
The funeral will be held on Friday (tomorrow) November 22, at 10 am at the Holy Spirit Catholic Church, Sheppard Avenue East in Scarborough, followed by the burial at the York Cemetery.
There will be also be a Thursday afternoon and evening visitation for Mr. Kam at the Highland Funeral Home on Sheppard Ave East in Scarborough.
John Kam was born in 1951 to Wah Chew and Jean Kam in St. James, Trinidad, and immigrated to Toronto when he was 18 years old.
He worked for Toronto City Hall as a budget analyst where he had a successful career for 34 years. He retired at the age of 52.
Mr. Kam will be best remembered for his involvement with Toronto’s Carnival, be it the original Caribana, or the current Toronto Caribbean Carnival. Over the years he did it all from bandleader to CEO! Some of the highlights of his carnival career include winning the Caribana King of the Bands competition three times in a row (a first!) as bandleader for the Caribbean Canadian Cultural Club (the 4Cs). He held executive positions with the Caribbean Cultural Committee, which he chaired from 1992 to 2002. He was also Festival Producer for the Festival Management Committee from 2006 to 2008 and worked closely with the mas bands in a number of roles for the past nine years.
His mother, Jean Kam, two sisters and a brother survive Mr. Kam. He was predeceased by his father, Wah Chew.