Alexis Wrote A Book Set In Trinidad But His Parents Hated It, So He Put It Away

November 14, 2019
One day Canada’s top novelist will write about Trinidad. André Alexis wins the Writer’s Trust for his book set in Ontario 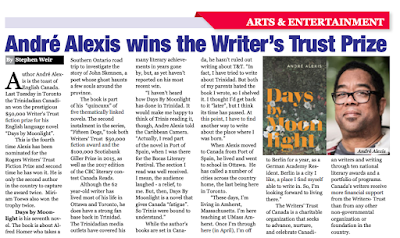 By Stephen Weir
Author André Alexis is the toast of English Canada.  Last Tuesday in Toronto the Trinidadian Canadian won the prestigious $50,000 Writers' Trust fiction prize for his English language novel "Days by Moonlight".
This is the fourth time Alexis has been nominated for the Rogers Writers' Trust Fiction Prize and the second time he has won it. He is only the second author in the country to capture the award twice.  Miriam Toews also won the trophy two times.
Days by Moonlight is his seventh novel. The book is about Alfred Homer who takes a Southern Ontario road trip to investigate the story of John Skennen, a poet whose ghost haunts a few souls around the province!
Days by Moonlight is part of his  "quincunx" of five thematically linked novels. The second installment in the series, "Fifteen Dogs," took both Writers' Trust   $50,00 fiction award and the $100,000 Scotiabank Giller Prize in 2015 as well as the 2017 edition of the CBC literary contest Canada Reads.
Although the 62 year old writer has lived most of his life in Ottawa and Toronto, he does have a strong fan base back in Trinidad.   The Trinidadian media outlets have covered his many literary achievements in years gone by, but, as yet haven’t reported on his most recent win.
“I haven’t heard how Days By Moonlight has done in Trinidad. It would make me happy to think of Trinis reading it, though, Andre Alexis told the Caribbean Camera. “Actually, I read part of the novel in Port of Spain, when I was there for the Bocas Literary Festival. The section I read was well received. I mean, the audience laughed. A relief, to me. But, then, Days By Moonlight is a novel that gives Canada fatigue. So, Trinis were bound to understand.”
While the author’s books are set in Canada, he hasn’t ruled out writing about T&T. “In fact, I have tried to write about Trinidad. But both of my parents hated the book I wrote, so I shelved it. I thought I’d get back to it “later”, but I think its time has passed. At this point, I have to find another way to write about the place I was born.”
When Alexis moved to Canada from Port of Spain, he lived and went to school in Ottawa.  He has called a number of cities across the country as home, the last being here in Toronto.
“These days, I’m living in Amherst, Massachusetts. I’m here teaching at UMass Amherst. Once I’m through here (in April), I’m off to Berlin for a year, as a German Academy Resident. Berlin is a city I like, a place I find myself able to write in. So, I’m looking forward to living there.”
The Writers' Trust of Canada is a charitable organization that seeks to advance, nurture, and celebrate Canadian writers and writing through ten national literary awards and a portfolio of programs. Canada's writers receive more financial support from the Writers' Trust than from any other non-governmental organization or foundation in the country.