IF Alain Bidard makes it up to the Caribbean Tales Film Festival on September 23rd he probably won’t bring all his film festival trophies with him when his animated movie, Opal, is shown in Toronto.  There is not enough room in his suitcase for all the awards the Martinique producer/director has captured since the movie came out last year. He has already won 48 awards and 73 nominations worldwide and will be in the running for some titles at the Toronto festival as well. 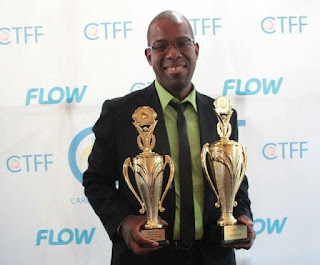 Alain Bidard (right) is the only Caribbean animation film director who has won that many recognitions. He is an animation film producer/director from the French island of Martinique. Over the past 20 years, he has produced and directed animated feature and short films, animated series, and live-action films which won more than 60 awards and 250 nominations in festivals worldwide.

The movie gets its Canadian debut on September 23th at the 17th annual Caribbean Tales Film Festival (CTFF). The festival runs from September 7th to September 23rd at the Imagine Cinema-Carlton Cinema in downtown Toronto.

The hour and 23-minute feature is the lead film for the CTFF’s We Will Survive theme night curated to showcases the resilience of the human spirit. Three films will be shown each with a different perspectives of difficult life experiences from a child’s eyes. Out of this World is a Canadian short film that takes a sci-fi approach life. A second shorty, Dorlis is a tale of a Martiniquan teenager who faces an evil mind in ailing grandfather’s house. Bidard’s feature film Opal is an animated movie, which at first blush looks like it is made for young viewers but it borders on being a dark adult’s fairy tale about  sex abuse set in Afro-Caribbean culture.

In Opal’s world, she is the sole holder of the magic in her magic kingdom where summer lasted forever and where the animals and the inhabitants are all immortal. She is a young princess and the holder of everything hocus pocus.  Legends said that her joy brings wonders and prosperity to the kingdom. But her sadness only brings chaos, darkness and death.

Created as a mash up of pyramids and ancient Egyptian dress mixed in with Caribbean characters and Creole speaking Gods. This is not your typical anime.  The story is set within a magical futuristic kingdom where villages sit atop floating pods, this world will only survive if Princess Opal (think of Rapunzel with curly hair) keeps on keeping happy. Her emotional state is what makes the sunshine, and the crops and flowers grow. Her frowns turn the land’s fortunes upside down.

The film opens with the inhabitants realize all their plants are wilting at a crazy fast pace. The Queen Mom is livid that her daily supply of white flowers is turning red, and heads may roll. Unsure of what is causing the magic to fade, the Iroko, a tribe of  Gods who look after the Kingdom  are called in to find out what is wrong  with the Princes. They  must discover where her magic has gone.

It turns out that Opal is a prisoner in her own home, kept there by her father the King.  He keeps her in fear by telling her  there are  monsters in the basement who want to kill her and destroy the country.

Turns out the King is the beast in the basement. He visits his daughter  regularly and  uses his white unicorn horn to drain her of her magic to make himself look young and suave.

Children seeing the film probably won’t get the symbolism – to a parent’s eyes the king with his phallic horn is raping his daughter daily, feeding off her youth to make himself feel young again. It is obvious he will never let her go. On the walls of the castle the words; Id, Ego and Superegos are lit up like neon signs, we adults will get the inference that Freud would have a field day here because inside this king’s brain it is all about sex and power.

Children will love the ending. Opal fights the monster losing her many hang-ups in the process. The sun comes out, the plants are reborn and the king is nothing now but a bad memory for Opal.

This is the first full length Caribbean made animated adventure story to be shown  at the festival, we 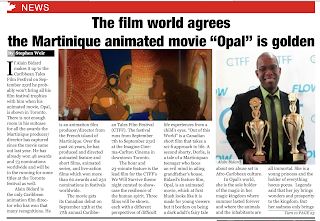